When you go out to eat dinner with people in Korea, there are rounds. Typically, most Koreans go up to Round 3. We unfortunately stopped at 2 – but didn’t regret it at all.

I guess it’s pretty unclear as to what “rounds” mean. Is it? Or can you take a guess?

Every change of setting is a round. If you start off meeting up with friends at a restaurant, that’s considered Round 1. Then, your friends might suggest taking it to the next level – say, go to a local bar for drinks – and that would be Round 2. And then, you’d all be a bit influenced by the alcohol and therefore decide to hit either another bar or go to a Karaoke place – which would make that Round 3. If you go bar hopping, kudos to you. You’re hitting rounds.

Just a few minutes away from our Airbnb home, there was this BBQ restaurant – another suggestion from Andy who claimed that they had one of the best BBQ there. His former co-worker had introduced him to that restaurant during his last visit and it seemed somewhat fitting to meet up with the same guy at the same place as last time.

It was quite an uphill getting to that restaurant (possibly an incline of about 40 degrees??)  – but it didn’t stop us from going there a second time a few weeks later.

Once we took a seat, the waiter handed us a giant clear bag for us to throw our jackets in to avoid having it smell like any BBQ meal we were going to have. It was then tucked in under the table – out of the way.

Joe, Andy’s friend, took the liberty to decide what to order considering he had been to that place quite a few times. He suggested the thinly sliced beef. It was so thin that you can eat, eat, and keep eating without really getting full. And little did we know … we’d soon learn that we were making a mistake.

This place literally had one of the best side dishes. Their spicy radish kimchi, their Dong Chi Mi [동치미], and their green onion spicy mix were perfection. The great thing about side dishes is that they are always refillable. Oh boy, did we take advantage of that!

Dong Chi Mi is a freezing cold radish broth. You can even notice the bit of shaved ice in the bowl from the picture below. It’s refreshing and just the right thing to have with a BBQ meal.

In that single sitting, we ate so much BBQ (possibly about 8 people’s portion of that beef) and somehow, magically, we even had space to have our own bowl of Naengmyun [냉면] (Cold Noodles). It’s almost a must after BBQ because the meat can leave sometimes a heavy stomach and a lingering beefy taste in your mouth. Naengmyun is really meant to rinse, cleanse and leave a more refreshing taste. 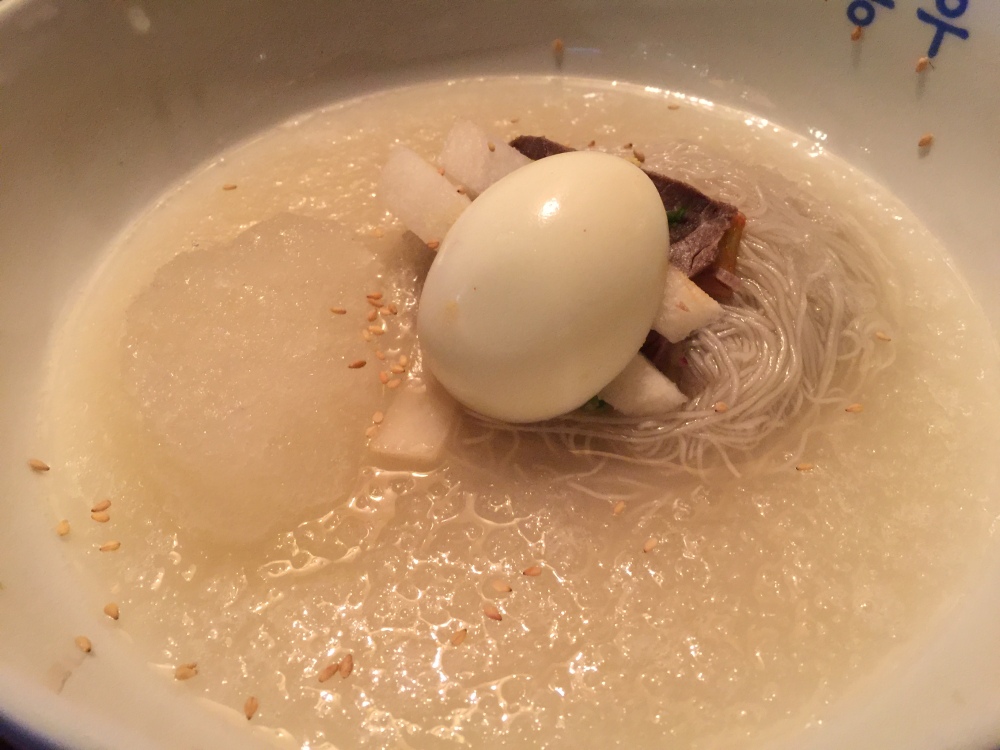 There were 3 types of Naengmyun offered at the restaurant: Cold Noodles in Broth, Spicy Cold Noodles, and a spicy one served in a flat stone bowl.

I had the cold noodles shown in the picture above. After eating all that beef, I felt like the insides of my mouth were getting a really good rinse. On a wintery day, it was quite refreshing!

Andy tried the spicy cold noodles in the stone bowl. The presentation was 10/10! It tasted pretty much like the one I had, but with a spicy sauce. Notice the sliced jalapenos too!

Overall, the beef was really good, but it wasn’t great enough to make it on my Top 3 list.(*Stay tuned to find out the two other restaurants!) 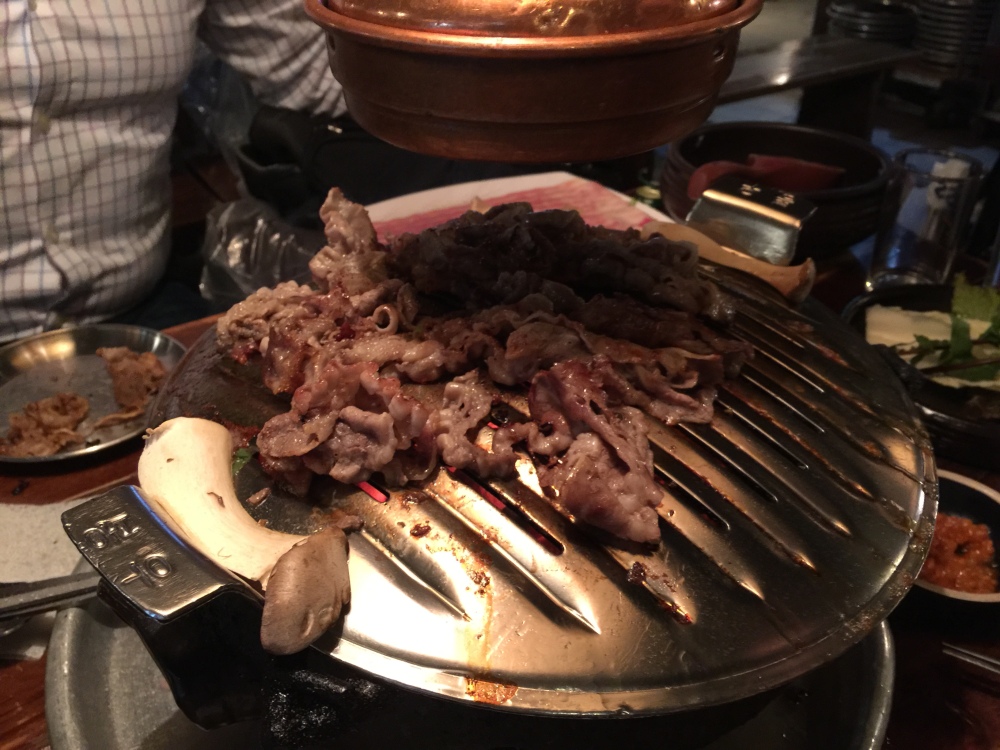 I personally didn’t like the way they set up their grill. This was one of those restaurants that brought out their own stone pot of charcoal upon placing your order. Not really sure if it’s obvious in the picture above, but the top pan was slightly dome-shaped? Since we had ordered the thinly sliced beef, it sometimes wouldn’t actually stay on the pan and it would fall off the edges.

On a completely different note, I’d give this restaurant a 5-star for its side dishes. It wasn’t fancy (or even meant to be – comparing to some other restaurants I had been to), but it really did the job. They were very simple side dishes with no extra effort to make it look presentable. Instead, the taste said it all. It was really the taste that mattered. One of the best tasting side dishes that I knew I had to go back to this restaurant just for that – which is not a regular thing someone would say/do!

Naengmyun was good, but again not as good as other Naenmyun I would have in the days and weeks to come. So I’d rate the noodles a 7/10.

We finished eating and we felt so full that I had already unbuttoned my pants – absolutely no shame! But it seemed like Joe wasn’t ready to let us go just yet.

Our stomachs may have shed a tear at that moment, but we knew it was a chance we didn’t want to let pass. So our foodie heart and mind (still intact at that point) kept begging for more. We walked around the area looking for a small pub that Joe wanted to visit, but later we found out that the business had closed down. We walked around a bit more … it was around 11pm and streets were already filled with other people either heading to their own Round 2 or heading home – because they were already too drunk to even walk. We witnessed a businessman passed out in front of a closed store right outside the pub that we ended up going to. This was apparently a very common sighting.

To be honest, I can’t really remember the name of the pub. We just walked in and out without even noticing. I’m not even a 100% sure if I would be able to find that place if I were to go back …

It was however an older style pub – one that my parents would have probably gone to in their days. Walls were covered with writings. It somehow added to the feel of the pub.

We had already drank a bit of Soju (Korean vodka) from our first Round earlier, but it didn’t stop us from ordering another bottle and also adding the pub’s famous Makgeolli. It almost looks like skimmed milk, but has a low percentage of alcohol and is made of rice. This type of alcohol is known to be the popular drink amongst farmers. Hence the presentation of it. It is often served or drunken from a bowl. Ours in particular was served in a giant stone pot, with an old-fashioned wooden ladle and old tin bowls.

It was the first time that I had tried Makgeolli and although it wasn’t my favourite, it had a sweet taste to it. A must-have with alcohol was something to snack on, of course.

Everything fried! The top row (white and green) is Boochoo Pajun [부추파전] – Chives pancake. The red ones are kimchi pancakes from the family of Pajuns as well [김치파전]. The others, from left to right, were egg-battered and pan-fried mushrooms, beef, zucchini, tofu, and fish.

At this point in the night, my hands were doing the “controlling” – my mind wasn’t. I wasn’t necessarily hungry considering we had eaten more than we were able to fit in our stomach, but as we were talking, I didn’t even notice that I kept eating, talking, eating, and drinking.

And so the night ended with us giving up at Round 2 because, lo and behold, we made a mistake earlier in the night when we ate way too much.

Soju is Korea’s most popular alcohol drink. It’s debatable whether people really like it or love that they can afford it. Ironically, a single bottle of Soju costs less than a bottled water. You will probably never encounter a restaurant in Korea that doesn’t offer Soju – it’s the very basic. 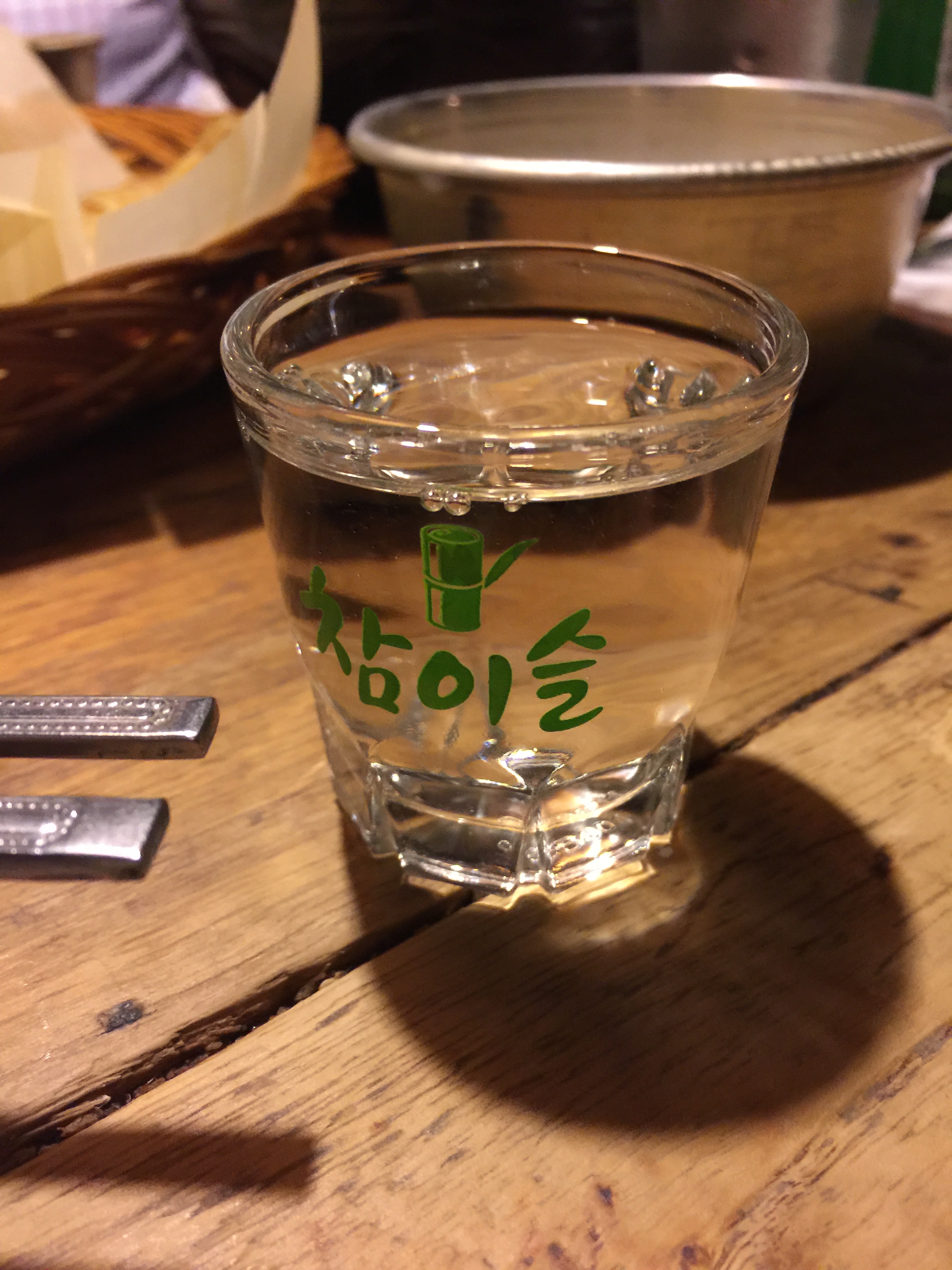 Soju can be purchased at any local convenience store or at the local mart. The bigger marts have it in all sizes – from juice box to big jugs.

And so concludes my second restaurant post as part of my SK trip 2016. Make sure to check out my Instagram for some of the photos from the trip. My next blog will feature another one of the my Top 3 BBQ restaurants – finally, THE place where I had a $100 steak!