From $100 steaks to a simple plate of marinated raw beef – Koreans sure love their meat whichever way it’s made, served, or eaten.

What is Korean BBQ?

Next to Bibimbap, Korean BBQ is the most popular Korean meal that many non-Koreans easily fall in love with. I mean, how can you not like beef cooked right in front of you with the aroma of the grill and the freshness of the beef right before your eyes.

Korean BBQ is quite popular, but it’s not a meal per se – it’s a way of eating. Unlike any steak restaurants you’d go to, Korean BBQ is all about grilling your own steak at your table. Some might think, “why pay to cook your own food?”. Whichever way you want to think of it, Korean BBQ is far from making you work for your own food. Far from it!

Koreans are all about food. Our culture revolves around food. It’s our way of caring for one another. And so, Korean BBQ is meant to bring the family and friends together – without leaving out the cook! It’s about spending good time and enjoying a nice warm meal with those closest to you. The typical table setting would have a BBQ grill in the centre of the table with the many, many side dishes wrapped around it – unless of course there are many more people and so requires a few extra grills! 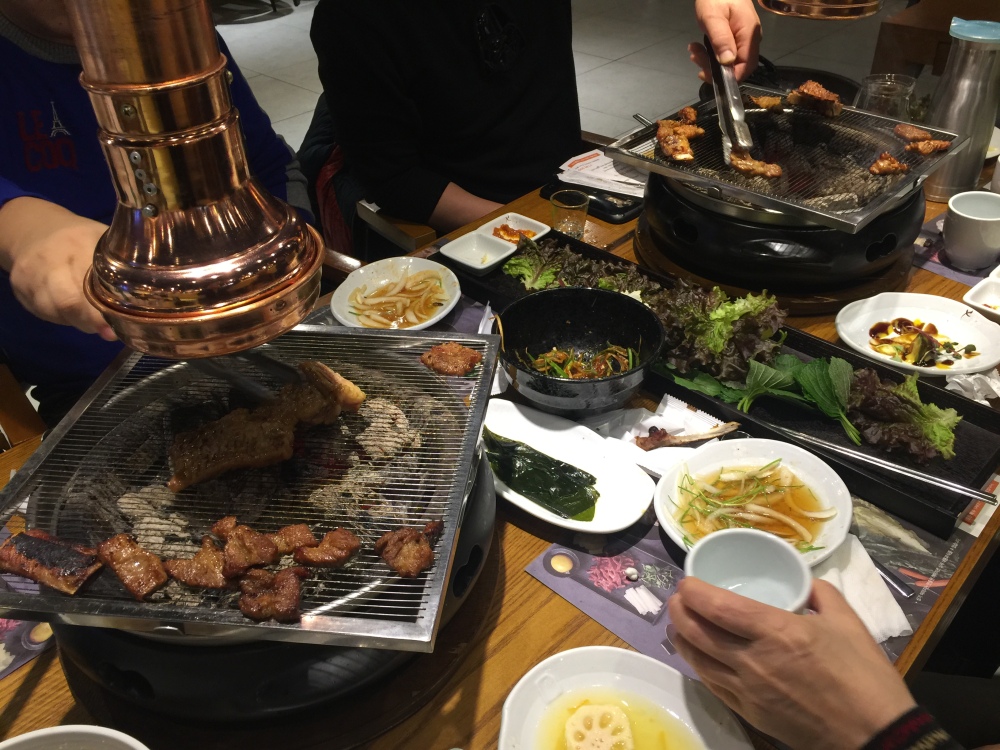 The Many Ways of BBQ-ing

If you go to any Korean restaurant in Montreal, you’re most likely going to have a portable gas stove on the table for grilling. Montreal has strict laws involving cooking methods and equipment in restaurants. For instance, oven vents/hoods like the one pictured above aren’t permitted. I also don’t think they allow people to cook their meat over charcoal at each table. But if you really don’t want to travel the ocean and want to try out something close to authentic Korean BBQ, then Toronto is where you need to go!

In Korea, it’s different. Their regulations are less strict and you can pretty much get away with anything – even having a pet goat roaming your restaurant (as seen on some random Korean TV show). Not to say that Koreans are not obeying the regulations. Koreans just don’t have a strict law revolving around BBQ – because that’s just how they’ve been doing it – for centuries.

The most popular and best way to eat Korean BBQ is over charcoal. Again, it’s not just the method, it’s the aroma of the charcoal on the grilled meat. The taste vastly differs from a regular pan-fried or gas-grilled meat. Of course, charcoal isn’t an easy thing to get and once it’s used up, it’s … well, used up. So in every single household in Korea, whether big or small, you’ll find a portable gas stove. It’s small, convenient, and the second best thing after charcoal. It is widely used in restaurants where your waiter/waitress will change it every once in a while.

During my stay in Korea, I’ve seen a whole bunch of ways in which restaurants choose to set up their grill. You can already notice a stark difference between the two pictures shown above.

Some restaurants have a pit inside the table to give it a cleaner, more modern look. Whereas others will bring a giant stone pot with charcoal in it already and then place a metal grid on top of it. 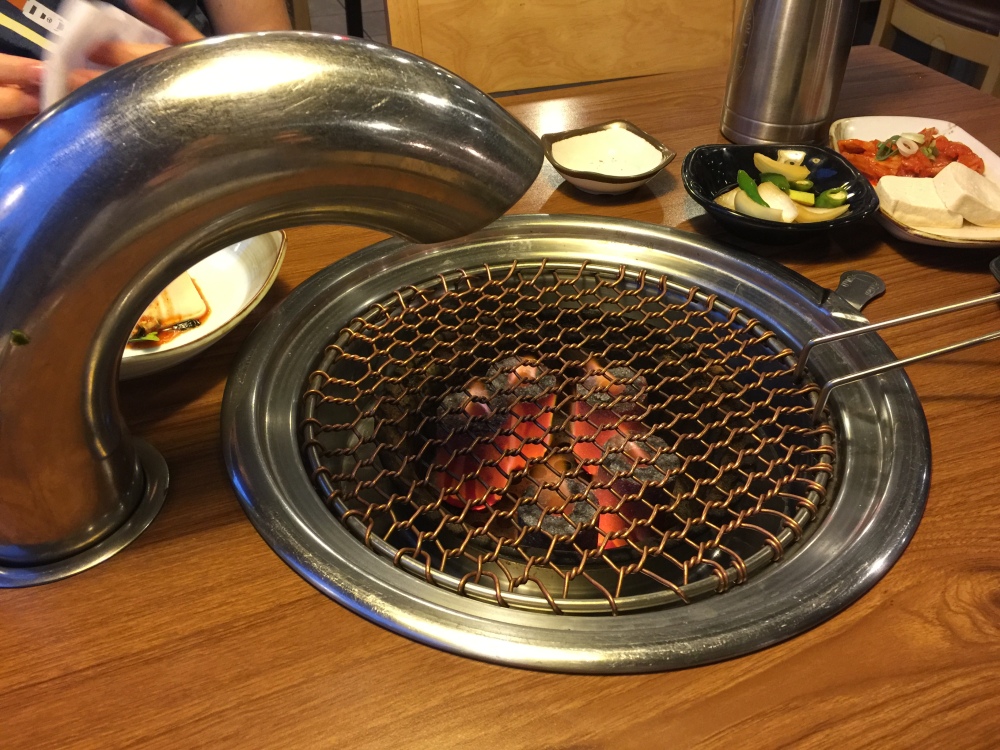 I hope I’m not the only one who gets excited over these things. I’m always intrigued of the various ways in which restaurants set up their BBQ. Some even dare to become innovative and create their own patented grill.

During my stay in Korea, I had a list of Korean BBQ restaurants I wanted to visit. Since restaurants are literally sprawled out everywhere in Korea like dandelions on a vast field, I wanted to search for those that had a sense of uniqueness to the way they made/served their dishes. Chul Deun Nom [철든놈] is one of the restaurants that was on my list that never got a visit because we were running out of days to go out and eat. I’ve already decided that I’m saving it for my next trip.

The owner of Chul Deun Nom [철든놈] came up with his own thing. He built something that you can cook not only from the top but from the sides too! Talk about innovative! Fun and efficiency at its finest.

As for the other stuff on my “To-Eat” list that I did get the chance to try out, you’ll have to wait for my upcoming blogs for those.

Initially, I had wanted to squeeze in all my Korean BBQ restaurants in one blog, but after I started writing about – *Spoiler Alert* – 10 Butcher’s restaurant, I began to realize that my blog was just getting longer and longer. I figured it was best to cut them up a bit. Before I end this blurb about Korean BBQ, you need to know about Hanwoo … ’cause it’ll probably explain the $100 steak story in an upcoming blog.

In Korea, it’s all about Hanwoo. Hanwoo is Korea’s premium beef. It’s a breed of cattle that is solely bred and raised in Korea. You can only really get Hanwoo meat there. Surprisingly, it’s actually cheaper to pay for imported beef than to order Hanwoo because of its freshness and its top quality.

Just look at the marbling on it!

It is said that the more marbling there is, the more tender the meat will be. The fat in between the meat gives more flavour and tenderness. The marbling is what determines the grade and quality of the meat. If you get the chance to visit Korea, make sure you try Hanwoo meat. It’s quite different from our regular steaks back home. It’s a whole other level of premium beef!