Flights are almost the best part of getting somewhere. I say almost because there’s always a chance that you won’t have the best experience – crying baby, inability to sleep properly, etc. As a kid, I didn’t like flying. I’d be afraid that something would happen and most of the time, I’d get airsick. Today, I pop some Gravol in me and just sit there waiting for the airplane food – possibly one of the most exciting part of flying. And I’ve grown fond of the takeoff and landing – the second best part of flying.

This time around, I had a much different experience flying with Air Canada than I did 5 years ago with my family flying a similar plane. Back then, I flew through Vancouver where our flight from YVR > ICN was 11 hours long and passed through the Bering Strait. At least 80% of the passengers were Korean. Half of the flight attendants were also Korean. We received such great service and the food was fantastic. I don’t exactly remember the meals we ate, but definitely remember getting a ramen noodle in a cup just before landing.

Our flight had one layover – Toronto. Flights to Toronto are so short that once you reach altitude, they serve you some snacks and drinks and next thing you know, you’re already preparing for landing.

I was surprised to find that the short 50-min flight still included in-flight entertainment. I watched Zootopia since I had watched the beginning of it with my mom on Netflix the previous day. 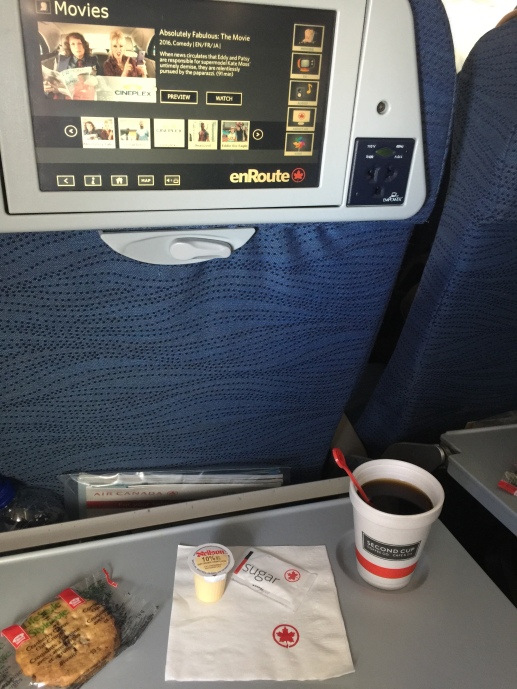 I made sure I had my cup of coffee every chance I was able to get. After having left YUL without an iced capp in my hand, I had to make up for it somehow. Air Canada served Second Cup Coffee – not too bad, but 1 sugar and 1 cream just wasn’t enough.

Side story: When we landed in Toronto, we noticed it was snowing. When we landed in Korea, I started seeing pictures of Montreal getting hit by a snow storm. Their first real snowfall. And we had JUST missed it! 😀 (sorry family & friends back home!)

Once we landed, we made our way to our next gate. Gate E79. Took us a long, long way to get there (Pearson Airport is just huge and so involves a lot of walking). We looked for a Tim Hortons along the way to try and get our last Iced Capp before taking off. We passed by 2 different Tim Hortons, but they were both inaccessible from where we were. Finally, we gave up and arrived at Gate E79. Once we got there and waited to board our plane, we turned around and spotted a tiny Tim Hortons staring right at us.

FATE is what you call it. They called for passengers to board, but we knew we had to. So as people were lining up to board, we ran over to Tim Hortons and ordered two Iced Capps and then we heard the very words that we feared: “I’m sorry, the Iced Capp machine isn’t working right now”

It was then that I questioned fate. Was it … fate?

So we grabbed an apple juice and ran back to our gate.

This time, we flew on the new Air Canada Dreamliner 787.

We had tried for a Premium Economy seat, but it was an additional $600/passenger. So we took the next best option and stuck with Coach, but with preferred seating.

As you can see, for my little legs, preferred seating was like extra-extra legroom. I was able to extend my legs and still have more room. I wasn’t able to reach the wall.

I guess the downside of sitting at the front was the media screen. It was a bit annoying that I had to pull it out every time and it didn’t pull out high enough. The choice of movies and TV shows weren’t as good as those from my flight to Malaga last year which made my 14-hour flight feel a bit long. I ended up watching bits and pieces of movies, documentaries, and TV shows I had already watched.

Our first snack on flight was a bag of pretzels. I’m usually not a fan of pretzel crackers, but these were so good that they were gone before they came around to serve drinks. I’m surprised I even had time to take a picture of the bag before it got devoured.

Before we left for our trip, we had the idea of buying a splitter in case we wanted to watch a movie together during the long flight. Thankfully, it really came in handy. We watched Central Intelligence together. The movie was really good – thanks to such a great duo (Kevin Hart and Dwayne Johnson). I was afraid I was laughing a bit too much during the movie! I hope I wasn’t bugging others around me.

Speaking of bugging … this flight made me realize that there could actually be something worse than a crying baby on a plane. For the 14-hour-long ride, and I mean during the entire fly up in the air, a kid of about 4 years old kept screaming, talking loudly, kicking the seat in front of him, and banging his table tray up, down, front, and back. I was more appalled that the mother did not make any sort of effort to calm her child down. I understood a few of the stuff that she was saying (studied basic Mandarin back in university) and she didn’t seem to say anything to him about calming down. The few minutes that he went to the washroom with his mother and the 1 hour where he napped was pretty much heaven for us. I forgot to mention that the little rascal was sitting behind my friend Andy. I felt bad for him because he couldn’t get any sleep at all – I mean, would you be able to if a kid was constantly kicking your chair? He had his feet up against the chair and just kept stomping. Imagine that. Would your patience run dry?

Our menu for lunch was either beef or chicken. 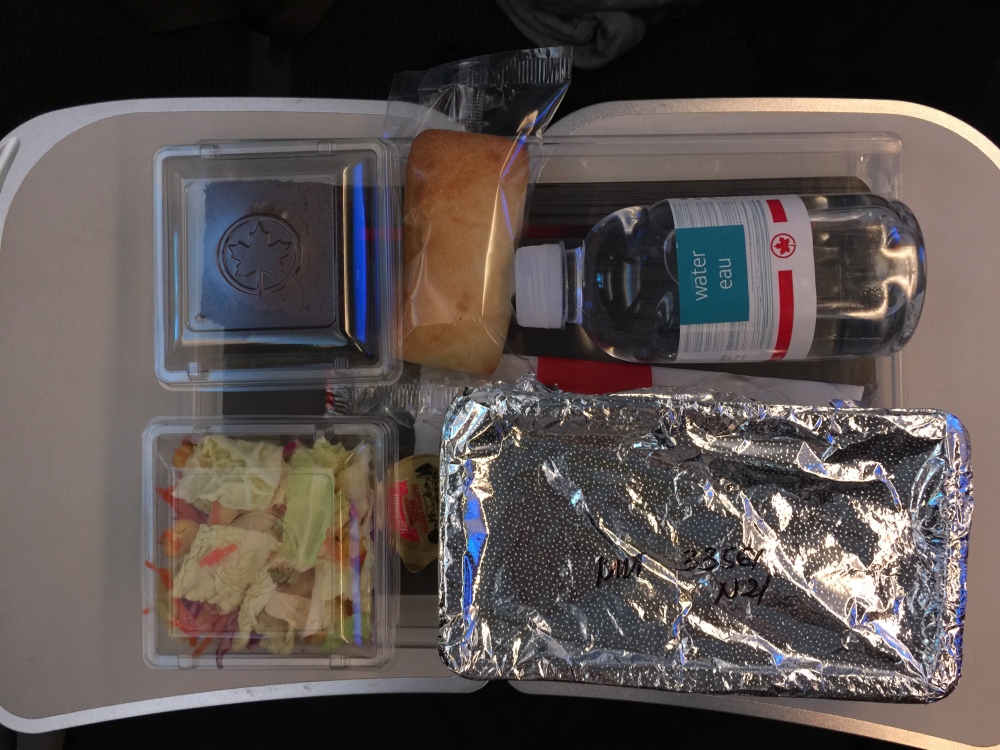 The chicken meal had a delicious creamy caesar dressing. I had taken the beef, tried Andy’s chicken, and then we switched plates. The chicken was so tender and the creamy dressing was perfect. 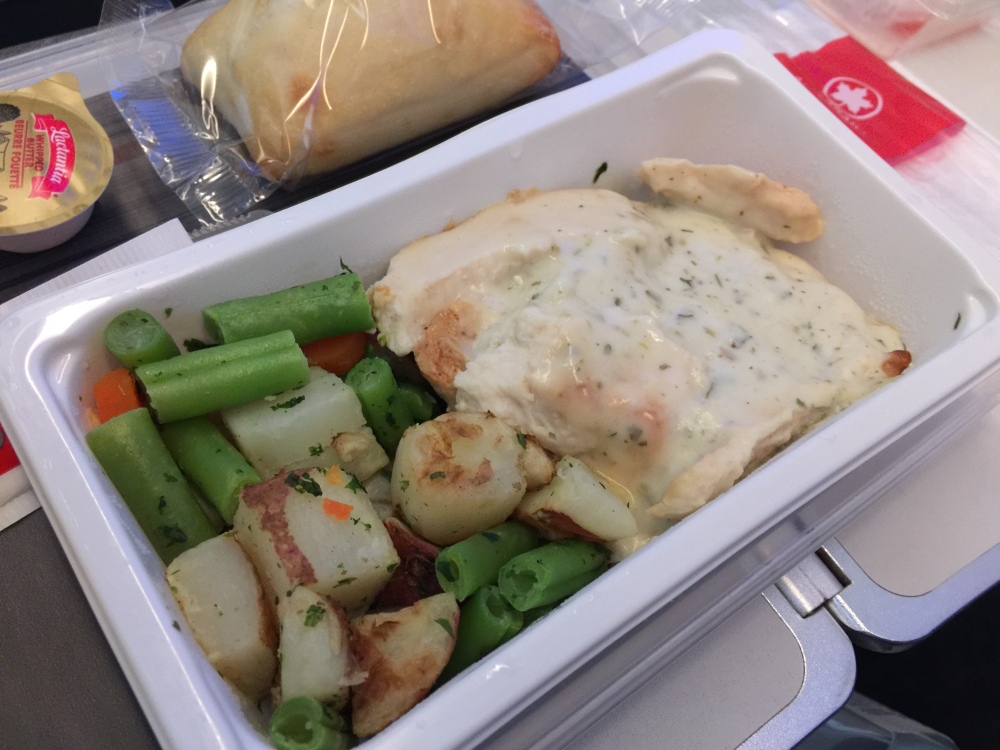 Andy’s little corner. Enjoying the first meal on the flight while … reading the menu on the media screen! 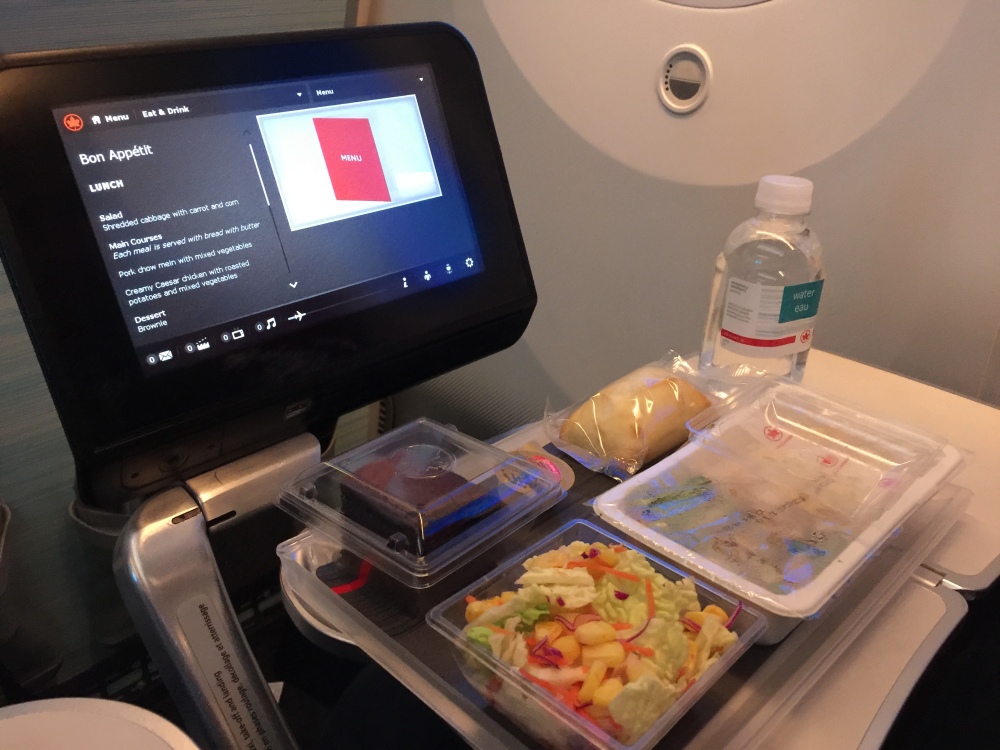 Our route was different from those that I’ve previously been on. The flight went through the Northern hemisphere past through Yukon and then through Russia and China before it landed in Incheon (ICN).

During our long flight, we looked out the window and found that we were over Russia flying above some snowy mountains. 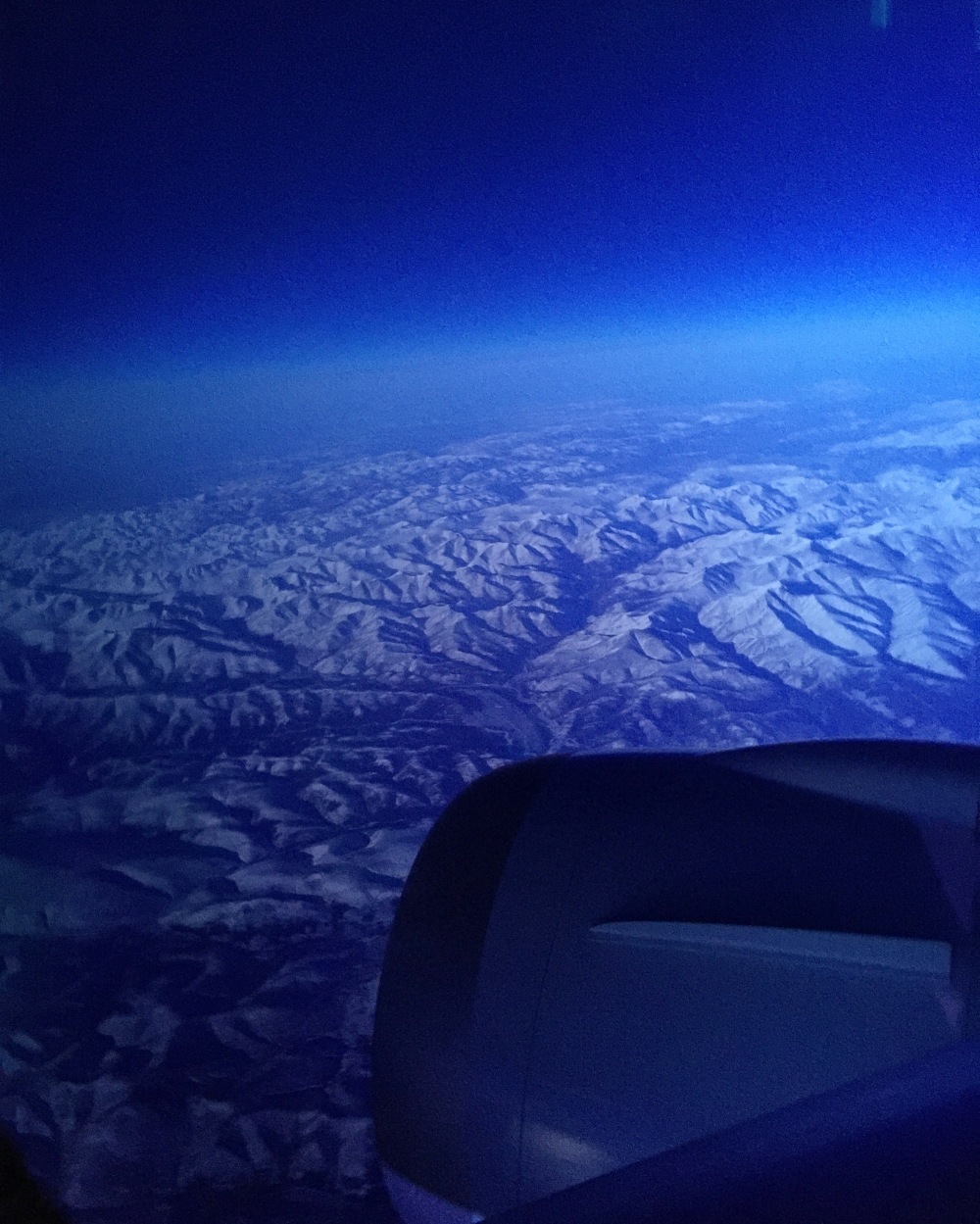 Halfway through, we were served a light lunch.

<< No documented picture here. We just ate it quickly because the food wasn’t served quick enough >>

As I finished a meal, I was always looking forward to the next one – whether it was a snack or a full meal. There is something about airplane food that I love so much. I guess it’s the excitement of discovering what you’re being served?

After our light mid-flight snack, lights were turned off and passengers started snoozing. I think I slept on/off for about an hour while Andy was watching Independence Day. When I woke up again, I watched Bad Moms. It was a good movie too, but a typical Hollywood movie – very predictable.

Our next and final meal on the plane (served with just about over an hour left of the ride), was breakfast.

The choices were either that or rice porridge. We both picked the omelette. It was pretty good, but then again, we were so hungry that we could’ve eaten anything that was placed in front of us.

Then finally, we landed in Korea.

I was definitely relieved once we exited the airplane. Walking felt weird as if my legs didn’t remember how to walk after having sat in a chair for 14 hours straight. We thought the exit from the airport would be quick, but we ended up staying there an extra 2 hours just to get out and figure out the transportation to get to our Airbnb. 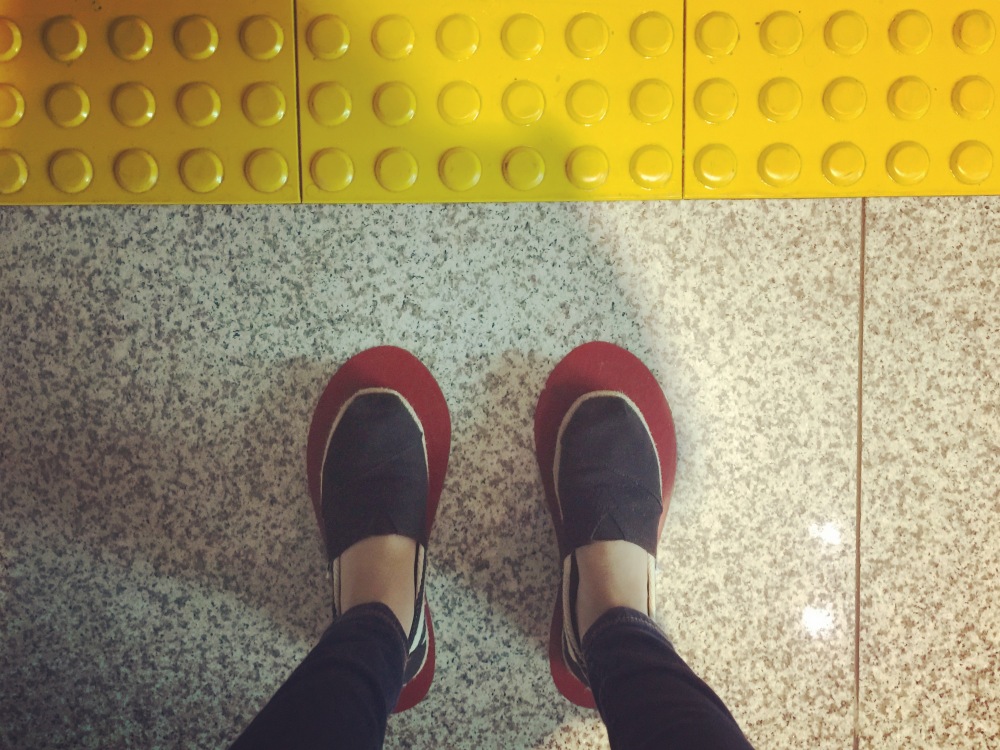 As soon as we left the plane, we went through customs where we found a nice long lineup of foreigners.

5 years ago when our plane was 80% filled with Korean citizens, going through customs was a breeze. There was two lineups for customs – Korean citizens or Foreigners. Considering my family and I are Canadian, we went through the Foreigner lineup of about 5 people whereas the other line was packed.

This time around, I was shocked to find that most of the people trying to get through customs were foreigners. Maybe I hadn’t realize that Korea is becoming one of the most visited countries in Asia nowadays – with all its K-Pop fandom and all.

When we finally reached the luggage area, ours had been lingering around long enough that it was just set aside of the conveyor belt. At least it was easy for us to just pick up our bags. We walked out and the airport was just so crowded. Everywhere we walked, we felt like we were just in everyone else’s way. People scurrying out of the airport and walking past us felt like I was the frog in the Frogger game.

We picked up our SIM cards (unlimited data for a whole month for just $80!!!) and then bought our bus tickets for the ride to Gangnam Station.

We arrived on a Monday in the late afternoon during rush hour, but considering so, the traffic wasn’t all too bad. It probably took us about 45 mins to an hour to get to Gangnam station where we met our Airbnb host who welcomed us into our home for the next month.

Arrived at our Airbnb home @ 7pm. I really wished I could pass out, but in order to avoid falling prey to jet lag, we both tried to stay up. We went down to the 7-Eleven just below our apartment for some essential foods and also picked up some ramen noodles in a cup (our lazy dinner for the night).

Then we unpacked, washed up, and finally went to bed at midnight.

Besides the 1-hour sleep on the plane, I had been awake for almost 30 hours. So you can pretty much imagine how the next day went.

I fell prey and took a 4-hour-long nap during the day when I intended to take an hour-nap.

But it was okay. I still have 25 days of my vacation. I think I can just sit back and just enjoy the fact that I’m on vacation whether I decide to go out or not. 🙂

*Photo credits to my iPhone 6+ still rocking the photo quality