I started writing the October edition of the First Fridays, until I realized ..

that I never even wrote the September one!

The September edition was probably the best one of the year.

But our edition of First Fridays in September was special because we organized it around two of my friends’ birthdays.

We had one of the greatest turnout for this month!

A bunch of us carpooled there.

But we all took different routes to get there, so we lost each other on the highway.

When we got closer to the Olympic Stadium (where the event was held),

we spotted Katrina’s car in the lane right next to us.

Whatever happened next was the funniest and silliest thing ever.

While I was driving past them,

And none of the 4 people in Katrina’s car noticed us.

or even rolling down the window!!

It was too funny to witness while I was driving.

We later told the rest of the gang when we met them at the Stadium.

And we had quite a good laugh! 😀

I had made a birthday card for Katrina and Analisa.

And I also made a “Golden ticket”.

A golden ticket in which offered them free food at any truck all night – paid by me.

That obviously did not work because we kept splitting up.

Or more like… Katrina kept walking away to buy food whenever I wasn’t paying attention!

Katrina started off with a Fish Taco. 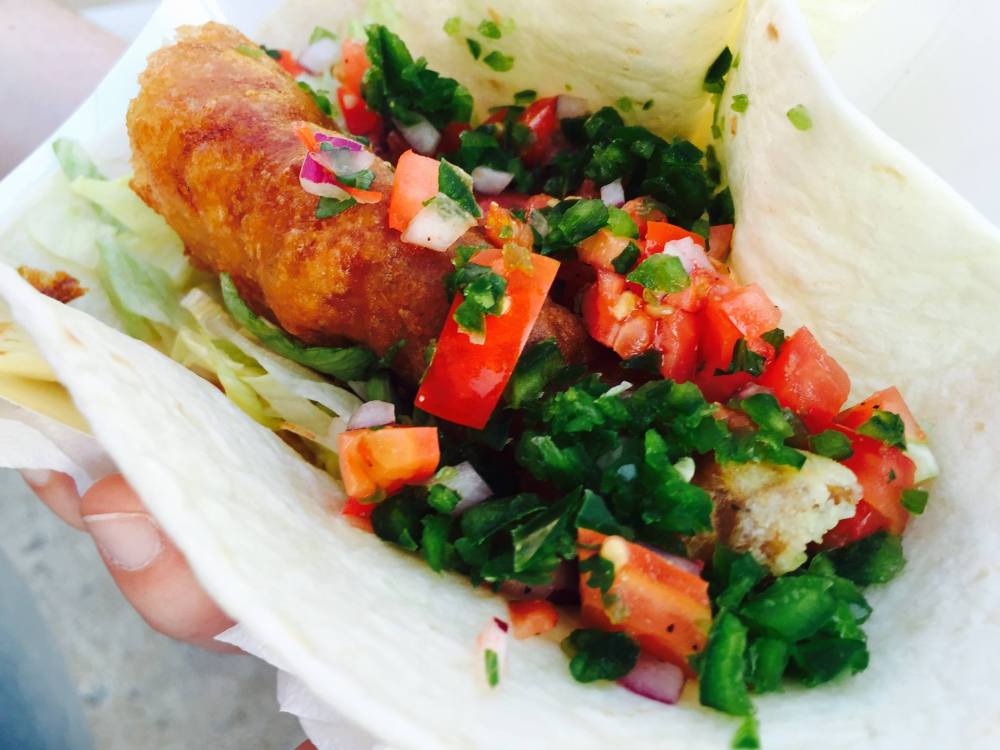 I didn’t try it, but she said it was really delicious.

While she was enjoying that scrumptious-looking taco,

I went over to the Cheese Truck and tried the Grilled Cheese with Bacon.

For those of you who’ve read my previous First Friday blog,

I mentioned that my friend Sarah thought she had ordered a Mac N Cheese, but accidentally ordered a grilled cheese.

THIS is the reason why I ended up getting a grilled cheese this month.

(So Sarah, your mishap wasn’t so bad. It got me to try their grilled cheese!)

After our first round, we performed our food truck ritual.

And by far, the cutest group selfie yet. 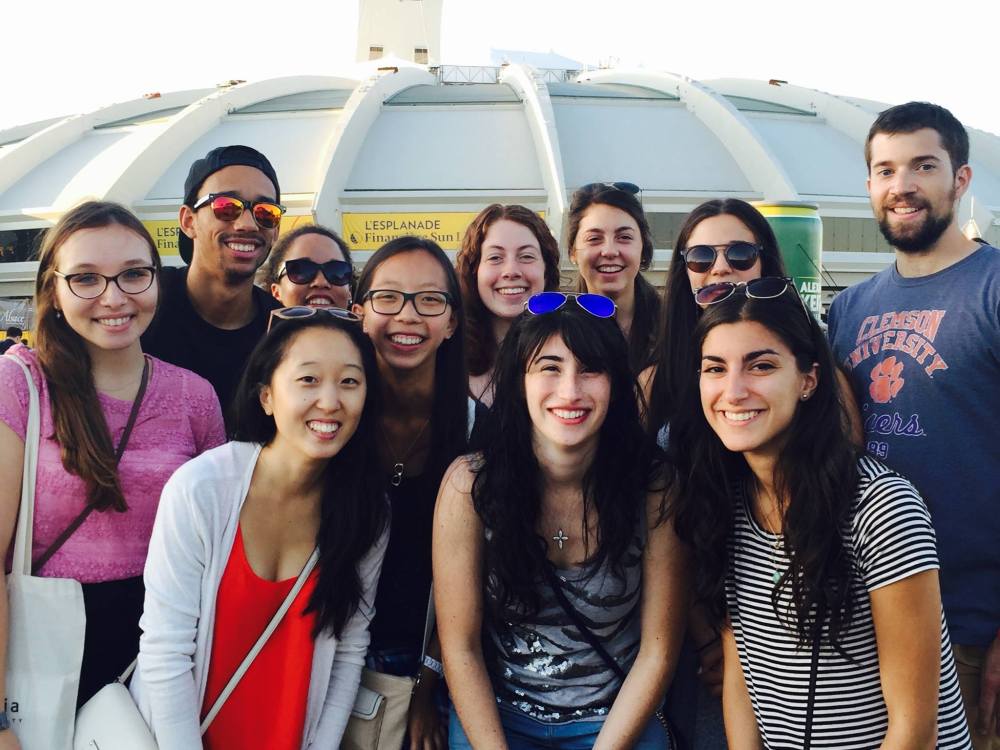 The “selfie” part is a lie.

But this random person saw us “struggling?” and offered to take the picture for us.

We thought it was perhaps rude to decline, especially since maybe .. we were struggling to fit all of us in that picture.

Ribs poutine gives you a food coma, but doesn’t knock you down

Analisa, Chels, and I shared a ribs poutine together. 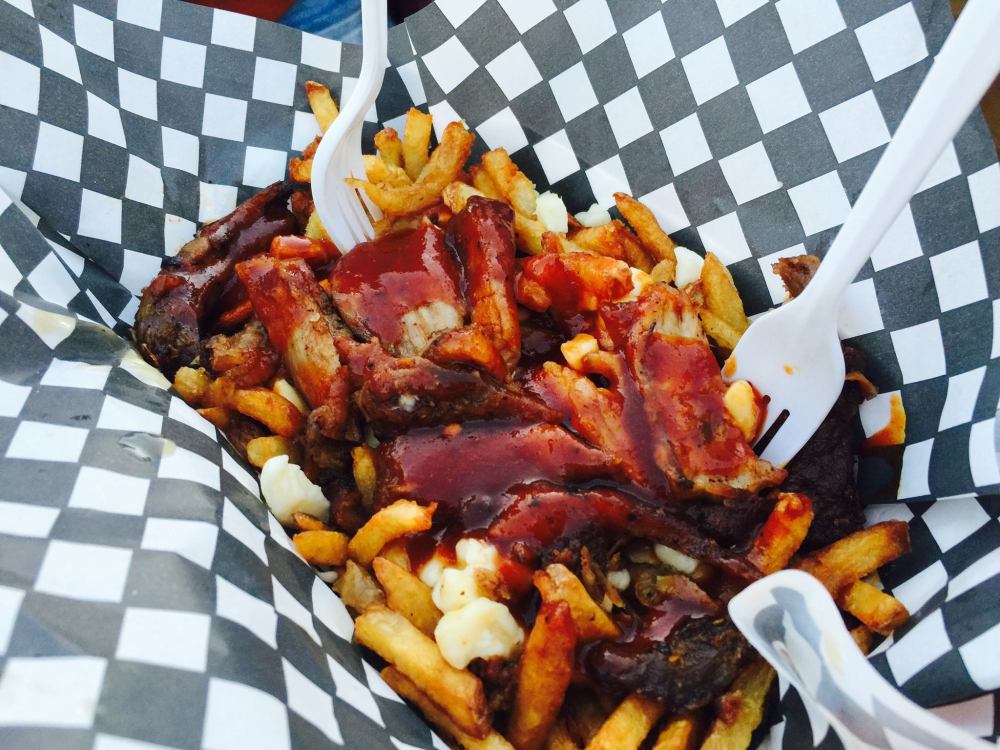 Some of the gang were already sitting out on the grassy field.

So we brought our poutine to eat there.

At that point, we had already been there for more than an hour,

and some of us had already gotten a food coma.

She had a food coma.

So she lied down on my leg … and continued eating the ribs poutine in front of her! XD

I love this girl ❤ Chels

Chels and I had planned a surprise for both Katrina and Analisa.

We decided that, at some point in the night, we’d disappear from the gang and buy some cupcakes to celebrate their birthday.

Chelsea had even brought sparklers and a lighter.

While we were sitting on the grass and everyone was relaxed,

Chels and I looked each other (our cue)

and told everyone that we were going to the washroom.

We found my friend Matt and his sister near the cupcake truck, so we had them help us with the surprise.

We bought our cupcakes and slowly headed over back to where the gang was sitting.

When we got close, we hid behind a food truck and started lighting up the sparklers and sticking them into the cupcakes.

So we gave her the cue when we lit the sparklers. 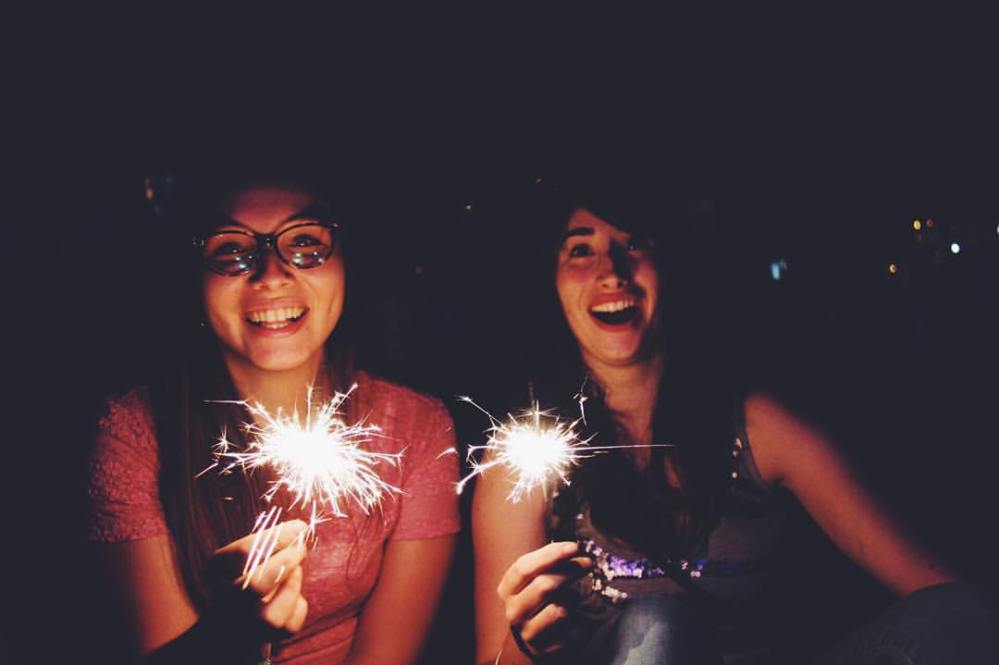 It was such a great moment 🙂

The best part of the night! 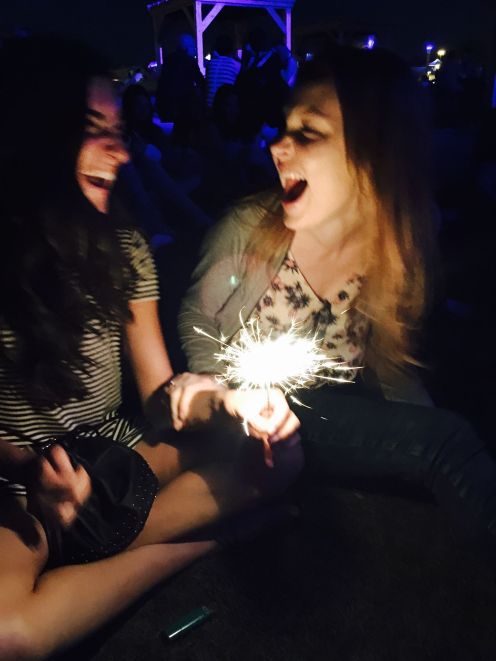 To be honest, I can’t remember what we ate afterwards.

But I do remember that I didn’t eat much.

It’s probably the reason why I don’t have a lot of food pictures from this particular month.

The September edition was fun.

Always a perfect combination for an awesome-filled day!

Most of us went to McKibbins Irish Pub afterwards for some drinks cause the night wasn’t over yet! 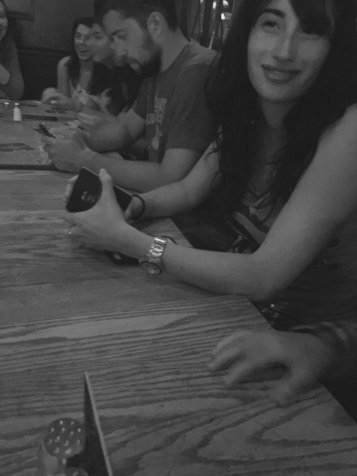 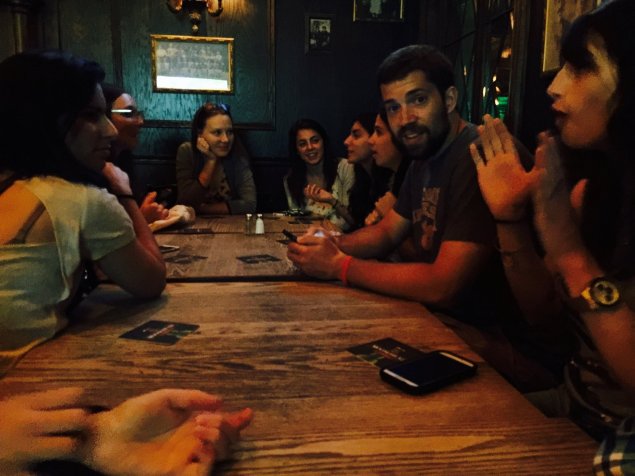 My next blog will probably be the October edition since it’s already half-written.