Paris Day 2 was basically our last day in Paris.

Because Day 3 was just our flight back home.

Or at least mine.

Cause Andy went back to Malaga since he still had two weeks left of his business trip.

Our plans for the day consisted of LESS SIGHTSEEING.

The day just felt long because we walked around a lot.

We had plans to walk down Avenue Champs-Élysées.

Since we were going to see the Arc de Triomphe,

we decided to start from there seeing as it was the end (or starting?) point of the avenue.

We took the metro and got out at the nearest metro station.

Which was actually just below the Arch.

We got out and there it was, facing us. 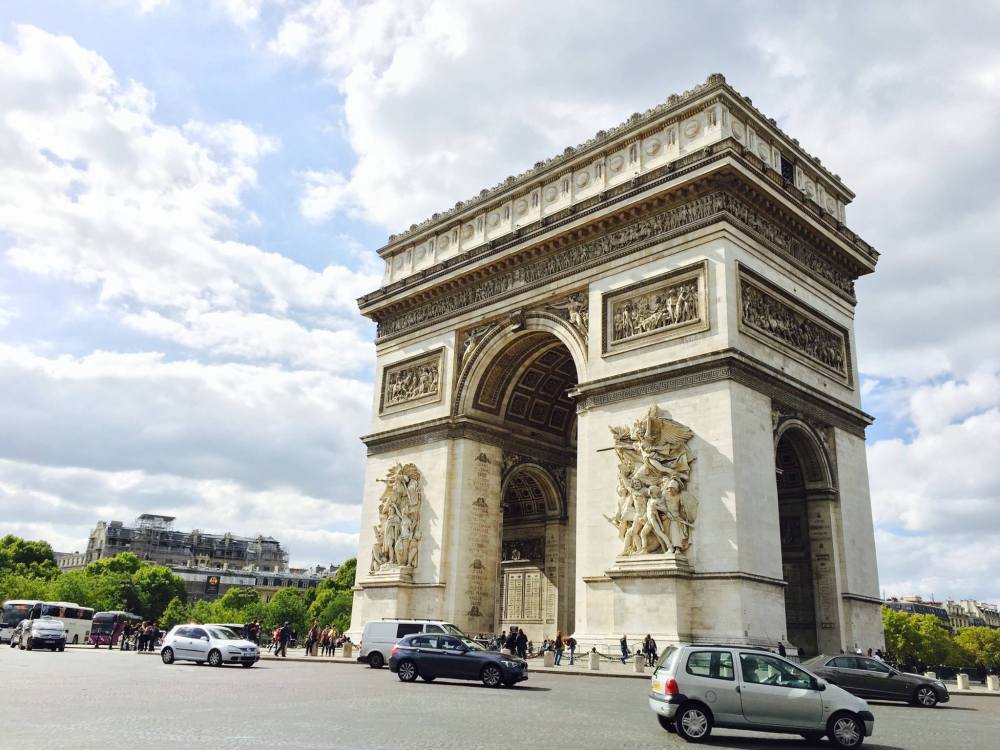 But across the giant, hectic roundabout.

We took a few pictures from our side of the street and then tried to figure out how to cross the street.

But there was just no way of getting there.

Until we saw a herd of tourists heading towards a staircase leading to an underground tunnel. 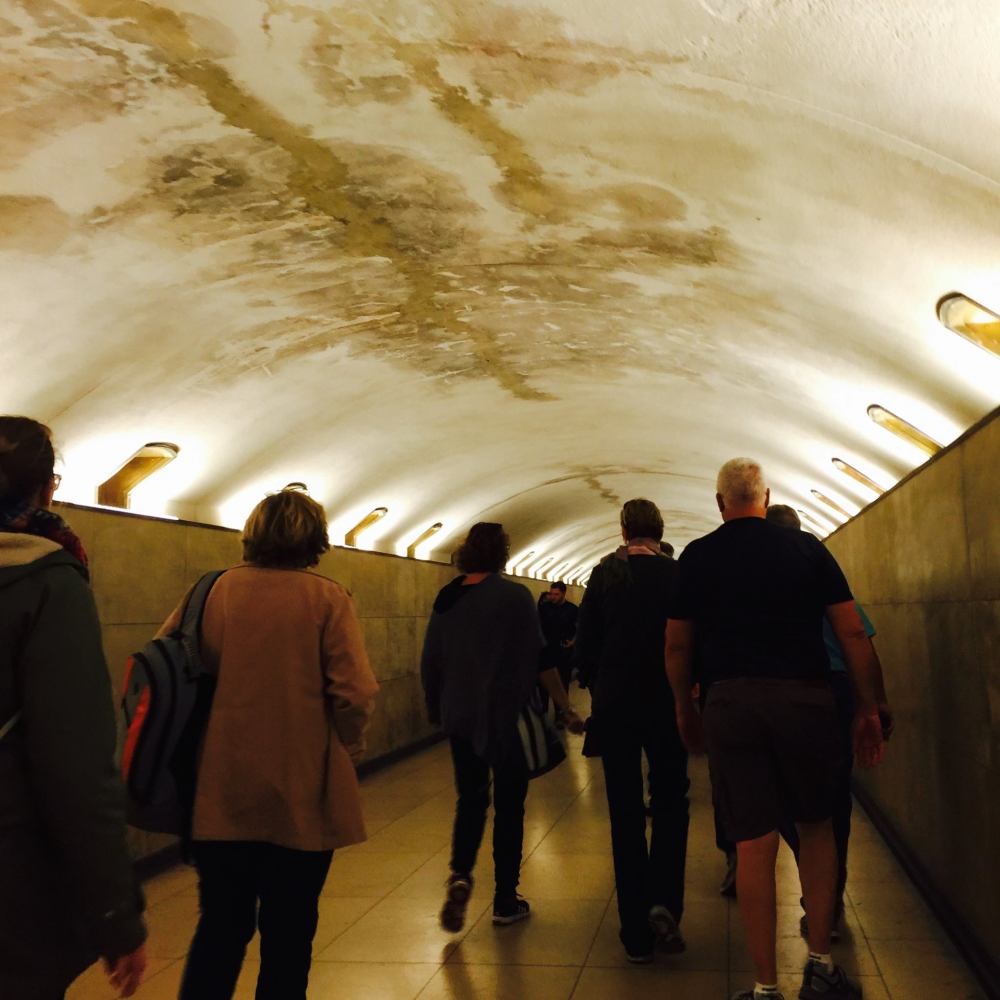 We followed them and then …

found ourselves in the middle of the roundabout – at the heart of the Arc de Triomphe.

Way bigger than what I had imagined. 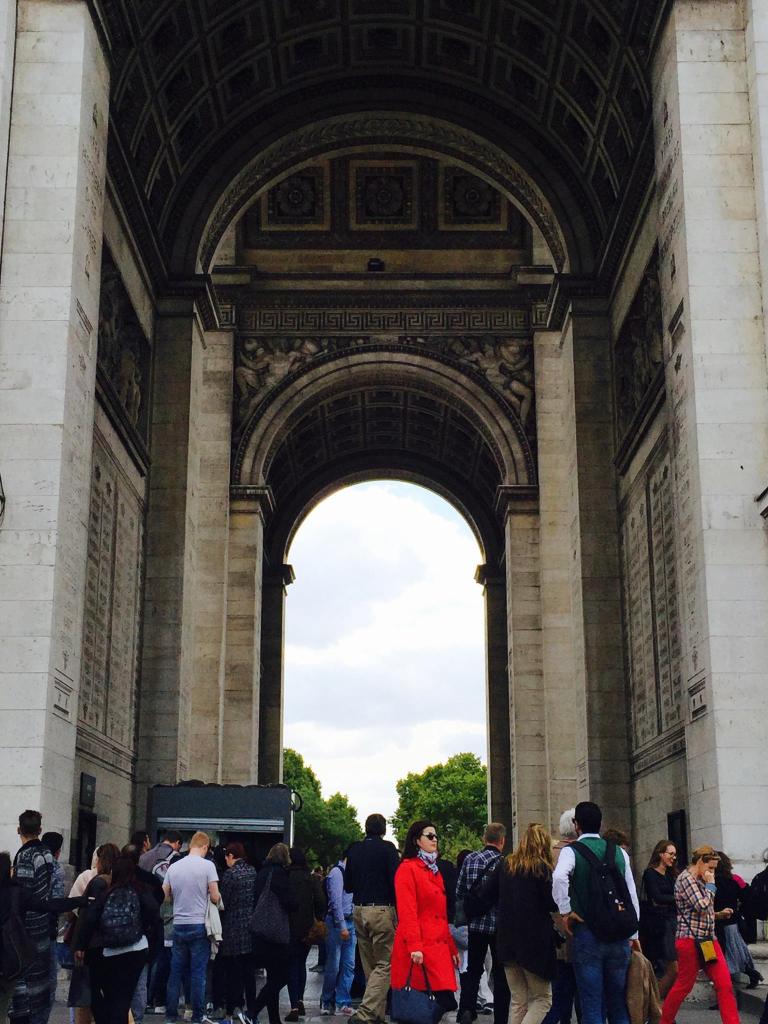 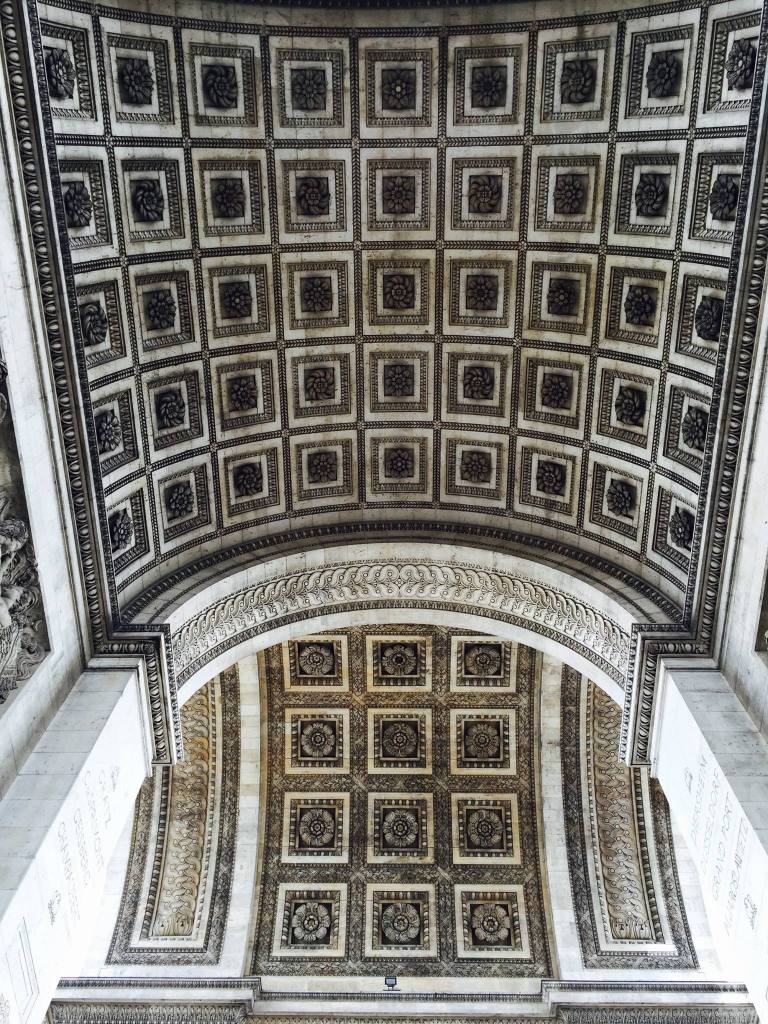 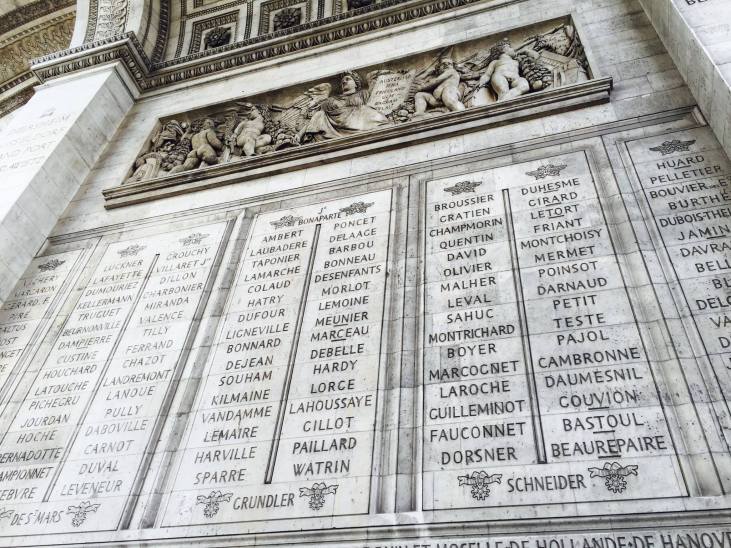 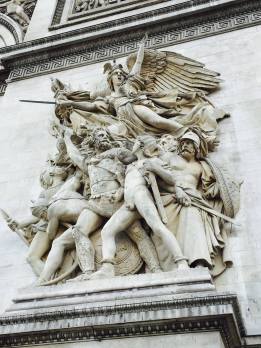 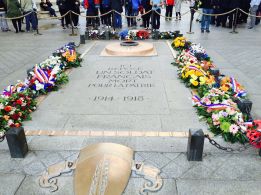 Standing in the middle of a roundabout that connected a DOZEN streets was quite something!

It had such a spectacular view.

And I was also able to see the tip of the Eiffel Tower from where I stood. 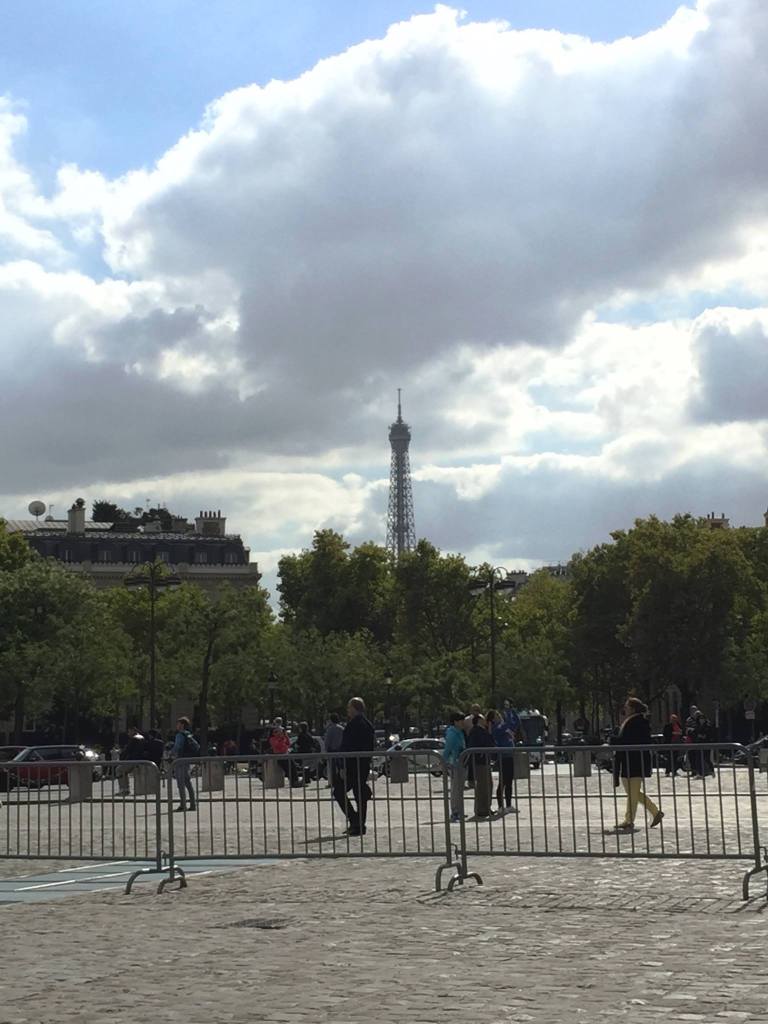 We took the underground tunnel back to the other side of the street and walked down Champs-Élysées.

It felt like walking down Fifth Avenue in New York City. 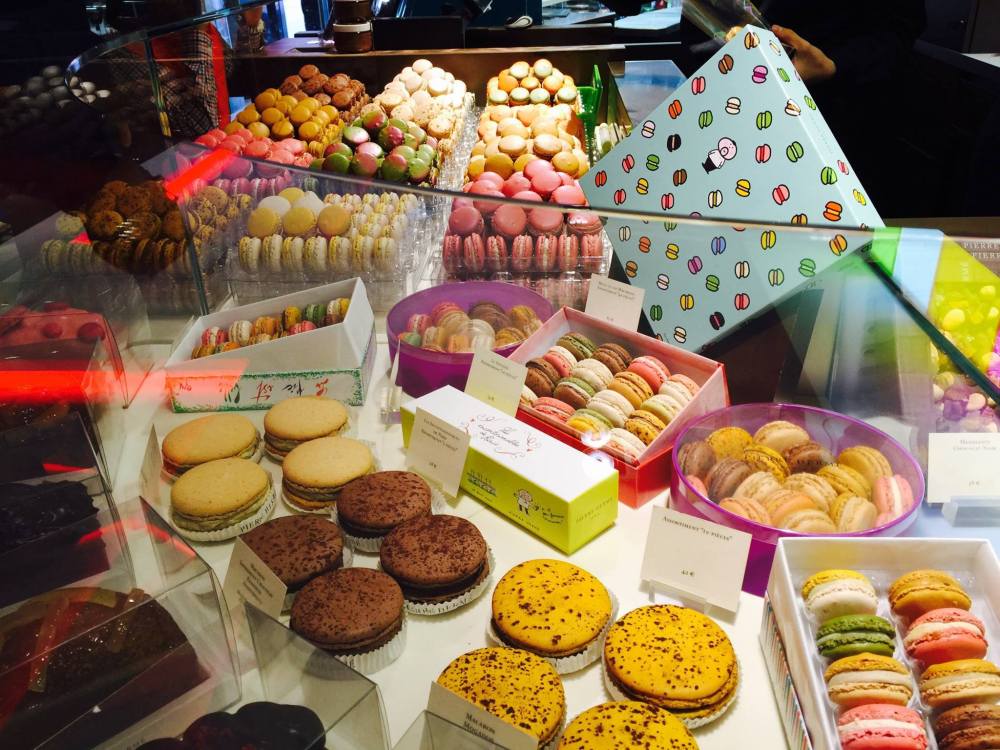 It was highly commercialized and just had so much going on.

Louis Vuitton had its own entire building with its own flag atop it.

When we crossed the street, at some point, we stumbled upon a stunning view of the Arch.

So we stood in between traffic and took this picture: 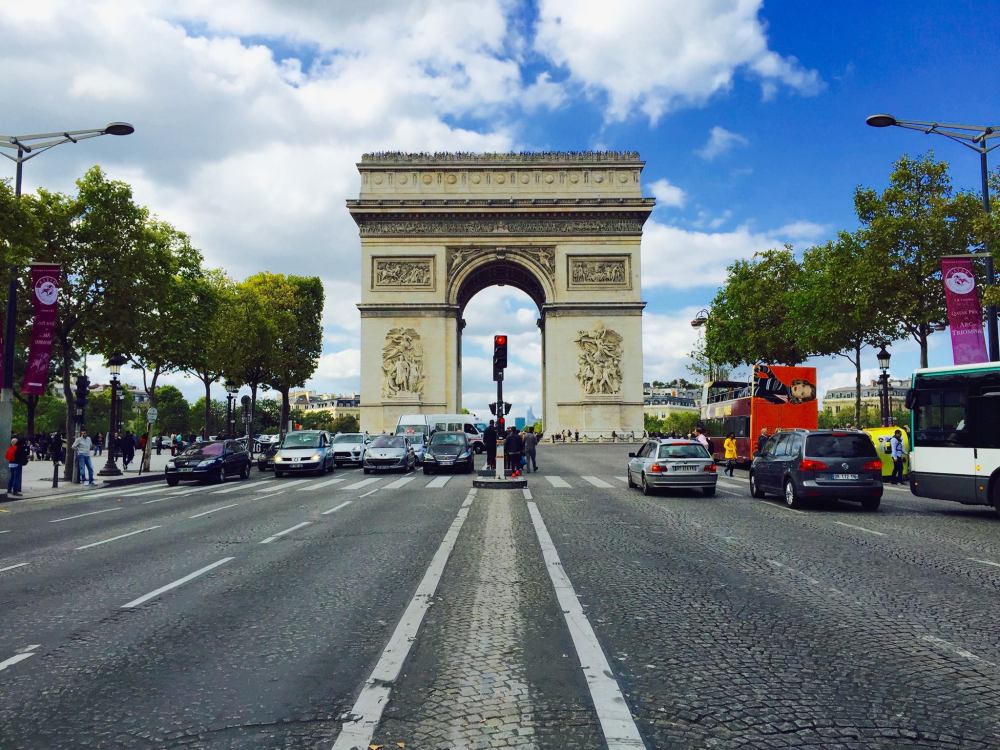 The entire time I was in Paris and in London,

I couldn’t believe how buildings, monuments, and statues were so well-kept.

They were sharp in its details and felt as though it was sculpted just a day before.

When I saw the arch from this angle (picture above), I was amazed by the details of the sculptures that were lined up along the very top edge.

After I took the picture, I stood there waiting for the green light to cross to the other side.

But I kept staring at the sculptures at the top of the arch.

And then realized they were all moving.

But to be fair, Andy thought they were sculptures too.

We continued walking down and decided to have brunch/lunch at

It was like a fast food restaurant selling baguette sandwiches and other pastries (chocolatine, croissant, etc.)

I can’t remember exactly what I had, but it was just a simple baguette ham sandwich. 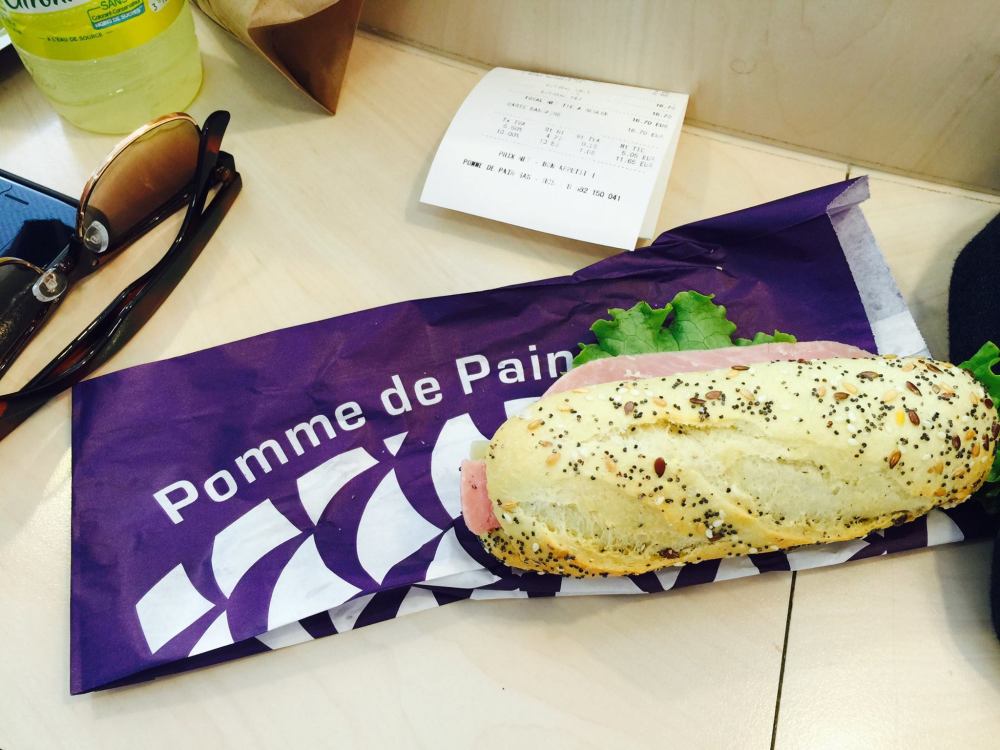 It was interesting how their cheese in any sandwiches were always blocks instead of slices.

It was a cute lunch and a cute little fast food restaurant.

It was quite crowded.

And we only found out after (when we walked out) that we had a sit-down option on their terrace.

At least we were in and out of that place in under 30 mins.

Gave us more time to shop a bit 😀

I walked out of that store thinking,

Just a few years ago (literally 2 years ago), I used to go to the Disney Store to buy stuff for myself.

And now, I was walking out of a Disney Store full of gifts for my nephew and niece.

It was a moment of realization that I was

Gustave gave me the Eiffel Tower to love

He singlehandedly designed the Eiffel Tower.

A Tower that was going to be globally known as the symbol of love in the heart of the French city.

I had seen the Eiffel Tower the day before from afar.

From the Louvre Museum.

From the walk along the Seine River.

and I had also seen it in the morning at the Arch.

But I was finally there.

Standing in front of it. 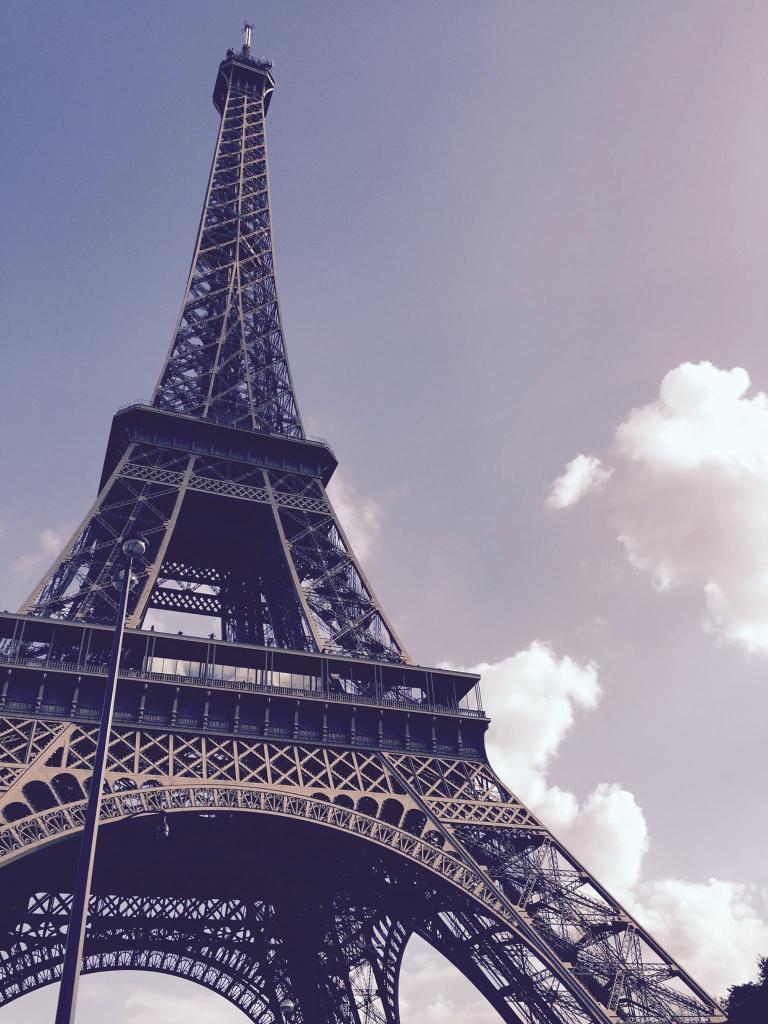 But somehow, the Eiffel Tower seemed more majestic and beautiful from far and at night.

During the day, it was beautiful too but it felt like seeing the skeleton of the iron-built tower.

Romantic, still, in its own way.

But somehow, it felt more alive at night when it shined its lights across the entire city.

We couldn’t do the tower lift because there were way too many people and it wouldn’t been a 2-hr wait.

Even if we had chosen to do the stairs up.

So we skipped it for another time – just like all the other attractions and museums.

I wasn’t disappointed at all.

It just meant that I needed to go back to Paris for all those. 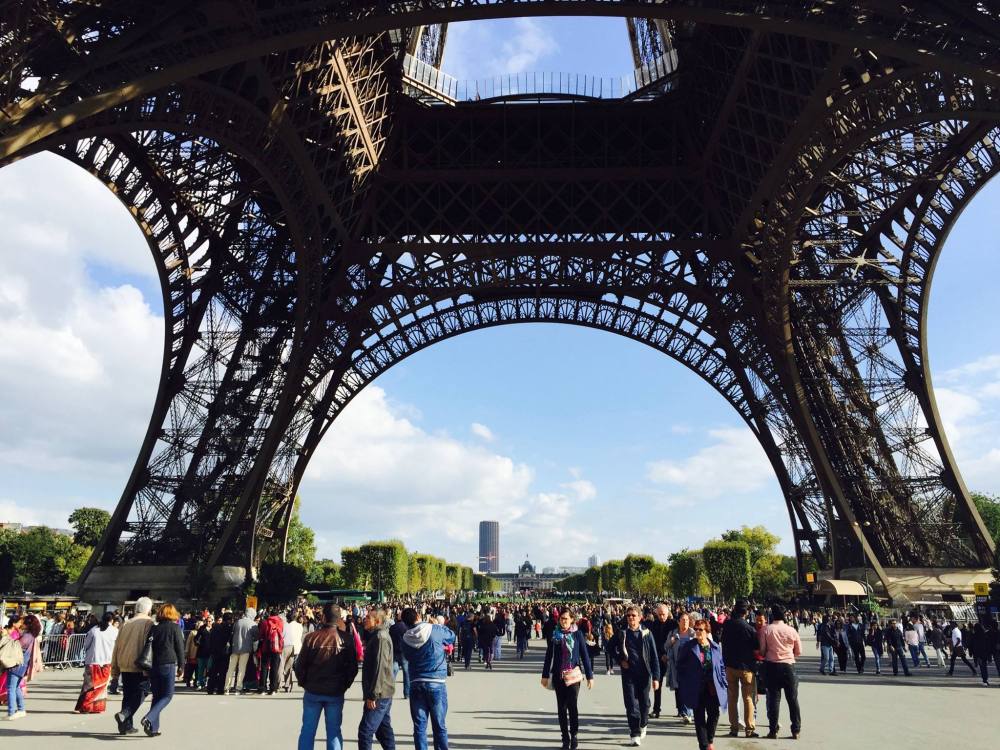 Sadly, I didn’t see any babies holding a baguette 😦

My friend had told me that she saw a baby in a stroller holding a mini baguette when she was in Paris earlier in the summer.

I wouldn’t be surprised though!

Every one else was holding or bringing home a baguette.

We even spotted a local student holding 2 fresh baguettes in his arm with some instant frozen pizza.

The epitome of a #ParisianStudentLife

We walked away from the Tower and it was 5pm.

It was too early to eat supper.

But we wanted to find a café to sit down for a bit – after all that walking.

Our search for a Parisian café turned into 1hr30mins long search.

Just 30 mins away from our 7PM dinner.

We were so exhausted that we just decided to walk in

(because we were so desperate to JUST SIT DOWN!)

We had been wanting to eat some pastries since before

but we had a dilemma.

But we were gonna have dinner in 30 mins.

What did we do? 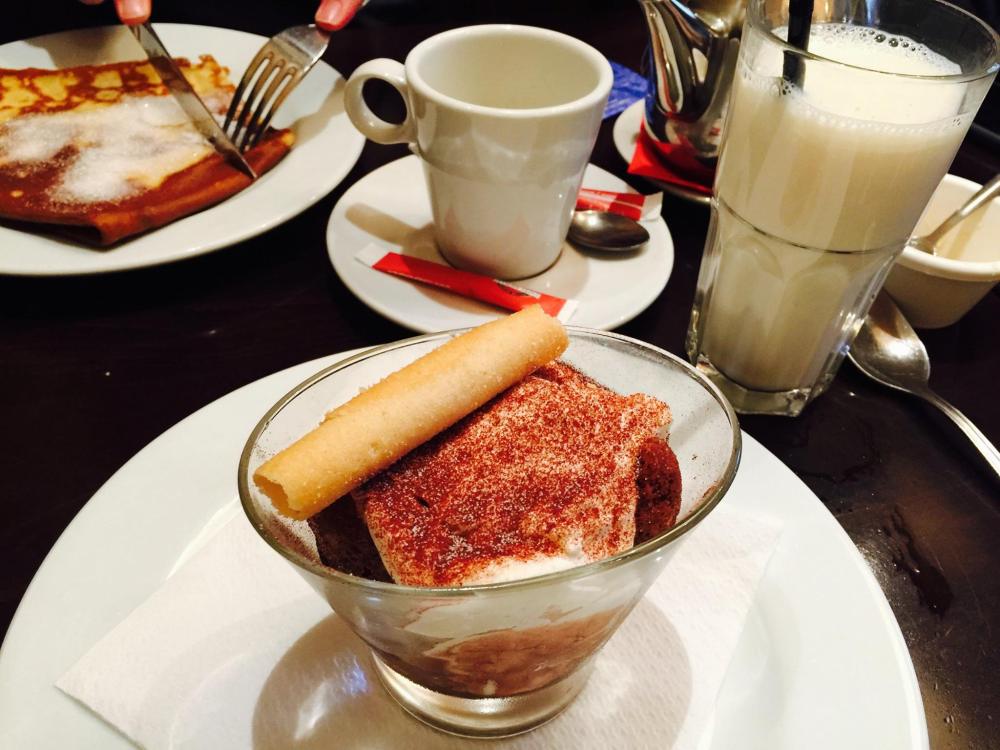 Ordered a tiramisu with a glass of milk.

My friend ordered a crepe with an Earl Grey tea.

We decided to reverse it and have dessert first.

This café was located near the Eiffel Tower.

When we went around searching for a café, we stayed in the area because we wanted to see the Eiffel Tower during the day and at night.

So we also had plans to eat dinner near the Tower.

So after our dessert, we walked towards our dinner destination. 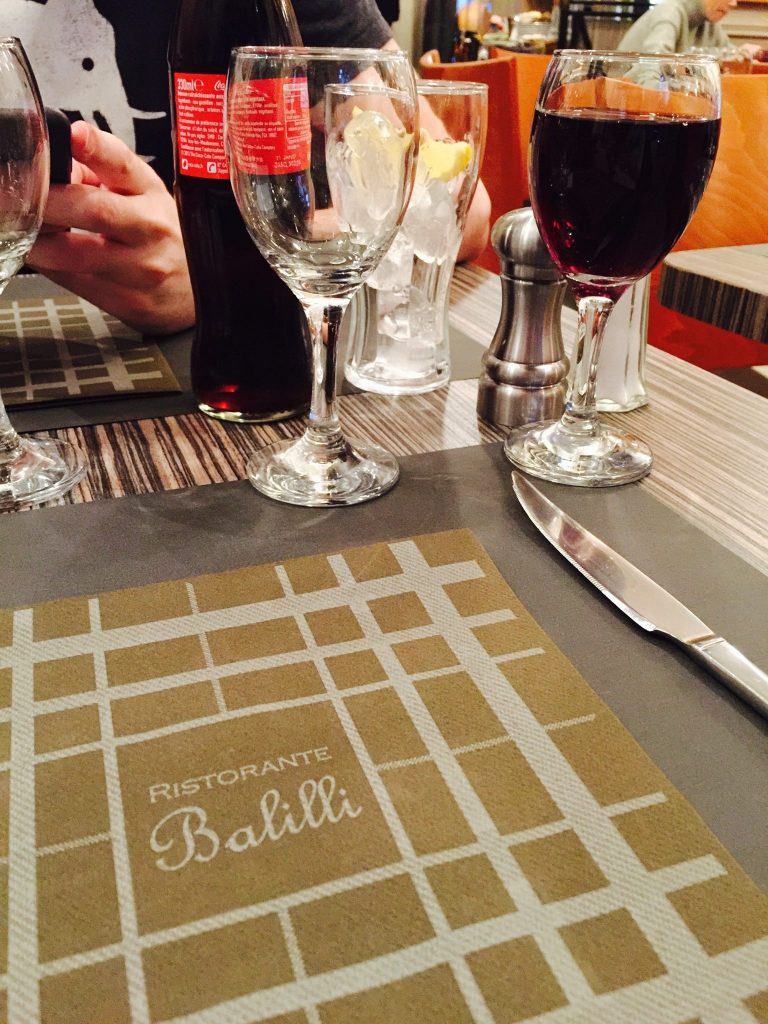 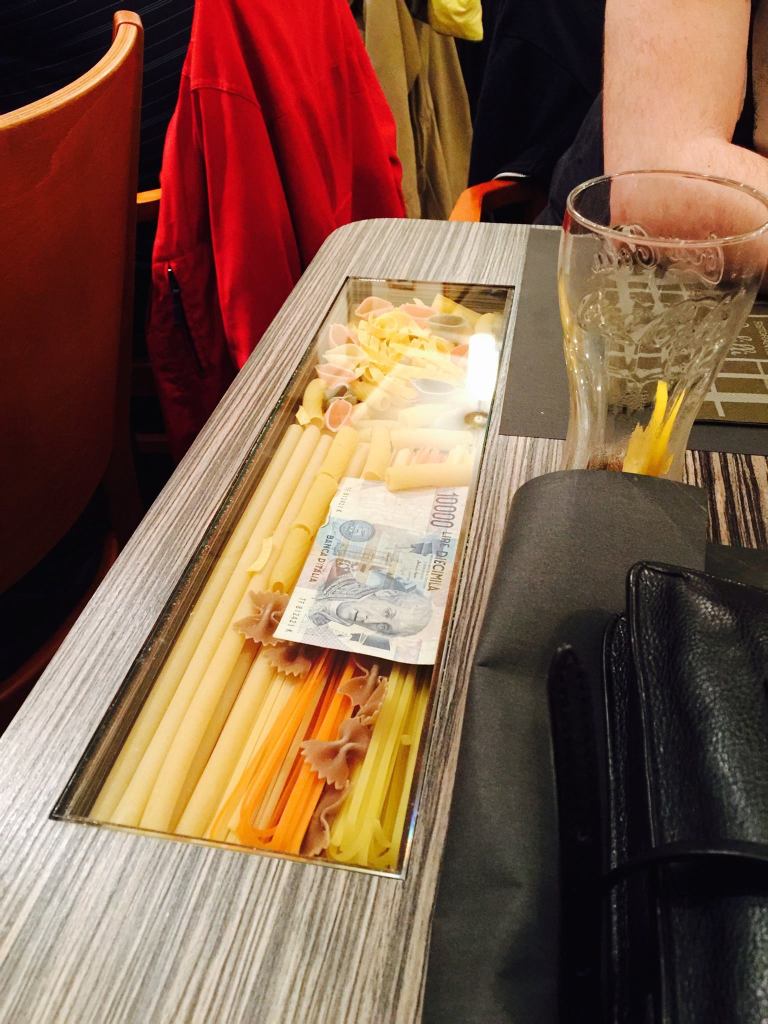 It was a tiny restaurant with a friendly staff.

Their food was delicious and their house wine was DEEE-LISH!

It was sweet, just the way I like it 🙂

I ordered a lasagna. 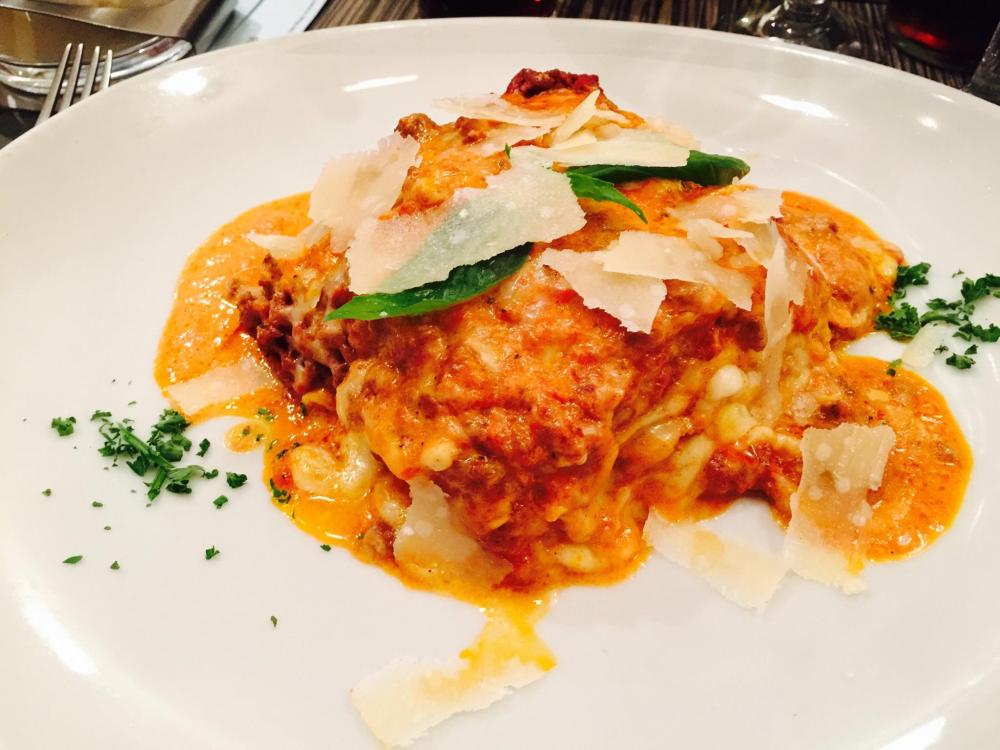 My friend ordered a Tagliatelle. 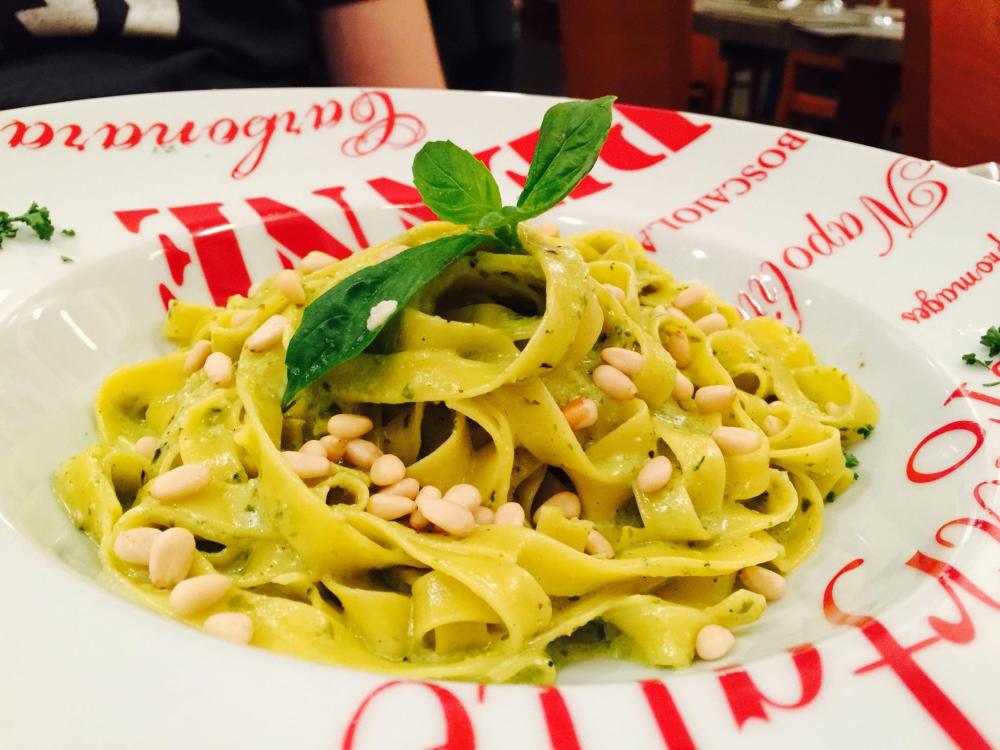 The overall experience was 9/10.

Everything was great, but was lacking something that would make the place an exceptional one.

Every restaurant needs something to make it stand out.

I find that’s always a bonus.

After dinner, we walked back to the Tower, as planned.

Seriously more beautiful at night than in the day ❤

It was cold, so we didn’t stay out too long.

But just enough to capture some night pictures.

While Andy was searching for an Uber driver to get us back to the hotel,

I continued to take pictures

until this guy approached us and just handed us an Eiffel tower keychain.

We thought he was harassing us to buy one off of him (since he was holding 10),

but he kept saying “Just take it! It’s free”

So he gave me one. 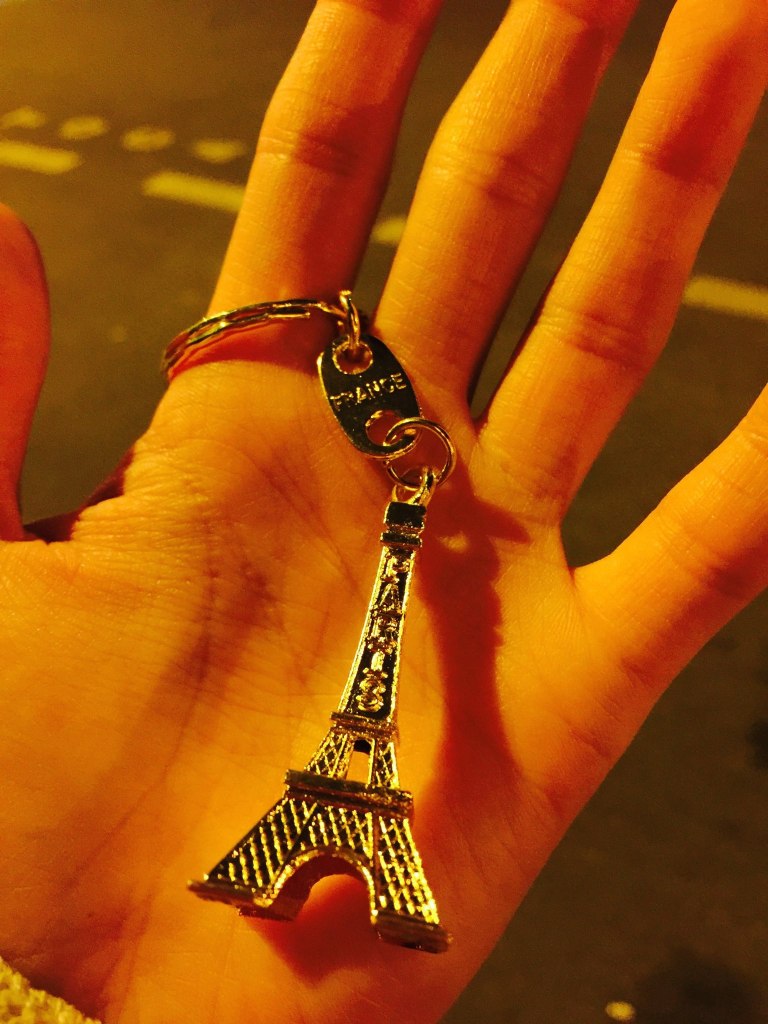 And that would be the last picture I would take in Paris. 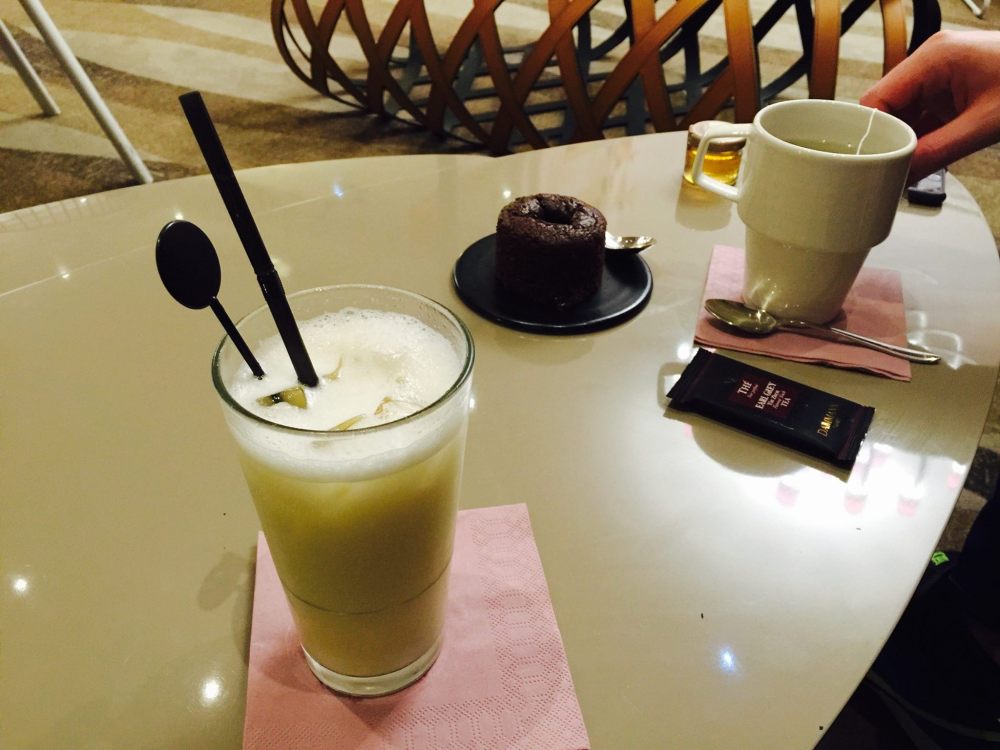 When we returned back to the hotel,

we went for a drink.

One was enough (said by my wallet).

And so concludes my short-but-still worth-it Paris trip.

As mentioned at the beginning, day 3 was just my travel back home.

When I was on the plane, I felt many mixed emotions.

It felt great to be going back because I missed the people back home.

The entire trip felt long and short at the same time.

I managed to squeeze in 3 cities in 2 weeks.

I didn’t want to go back to reality and have to work.

I just wanted to travel.

And that’s when I decided.

And I want more of it.

Even as I’m writing about it.

I miss the unfamiliar areas.

Settling in an unknown neighborhood.

Adapting to their culture.

It was really an experience of a lifetime that I surely hope that will lead to many, many adventures.

Whether it’s with friends, or a food adventure, I’m ready.

“Adventure is out there”