And walked to our first food destination in Canary Wharf.

It was probably the best food I had in England.

I wanted to go for something a little different.

I looked at the menu and didn’t know what half the things were.

Being in London, you would think that you’d understand everything.

So I had to use Google to search the items and get a “visual” idea of what these were.

Thankfully I did cause I ended up ordering stuff I would’ve never ordered if it wasn’t for Google Images. 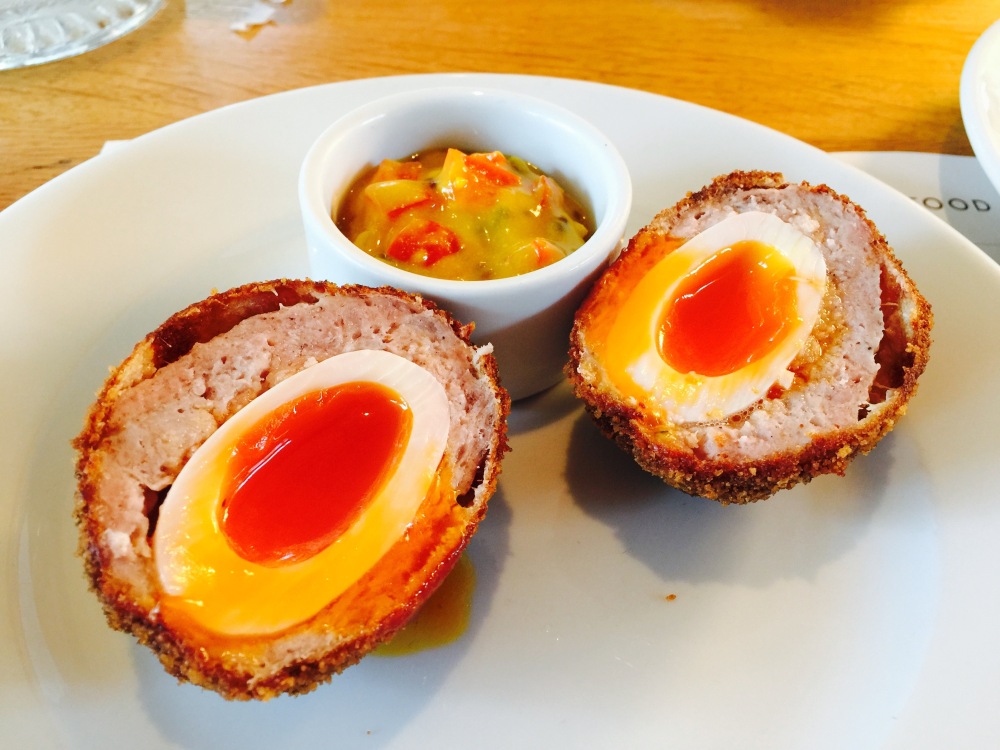 Scotch egg is a hard-boiled egg wrapped in sausage meat, coated with bread crumbs and then deep-fried.

In Europe, tapas seemed to be a popular eating option.

And it seemed like the smarter option considering meals are pricey and you kinda want to try everything on their menu.

So I ordered this to eat on the side: 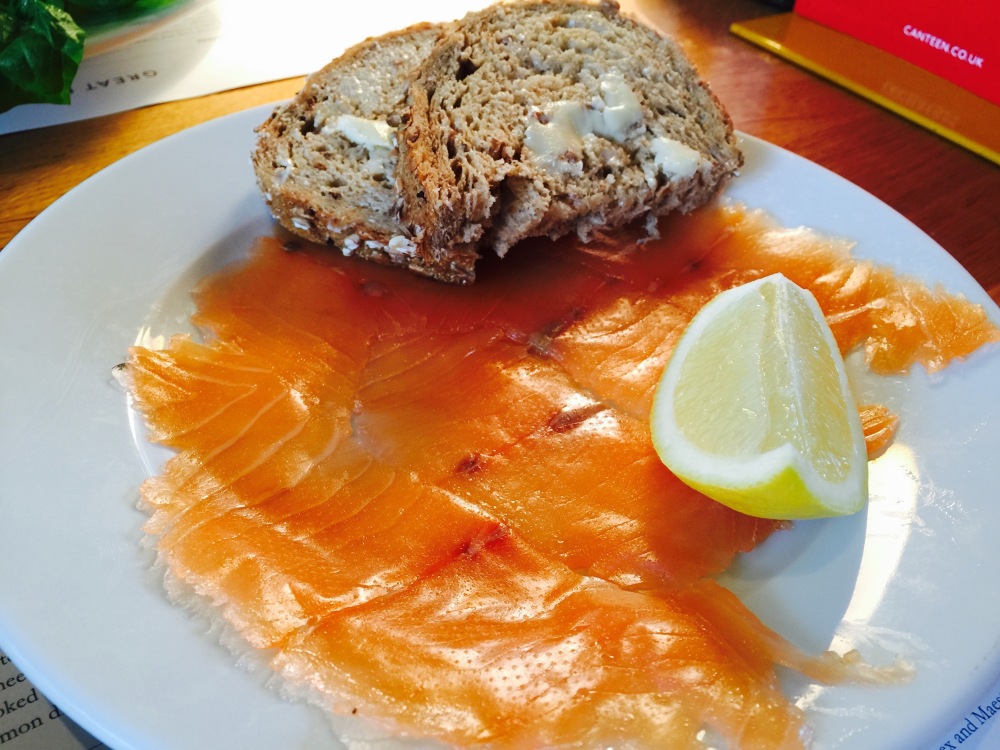 And I realized that all this time, I wasn’t eating the best of the best.

Usually when I eat smoked salmon, there’s always a slightly fishy taste that lingers in my mouth.

Hence the reason why I always eat cream cheese with every bite.

But this one was so perfect.

It had no lingering fishy taste.

The slices were thin, but it was so full of flavour in them.

As for dessert, I ordered a

(Bascially a cake in a cup)

And my friend ordered a

It was also quite delicious 🙂

The cheese was quite fluffy.

Just the way he likes it!

After our late lunch, we left Canary Wharf to go towards the Western side of the City of London.

We got ourselves an Oyster Card and took the famous Tube. 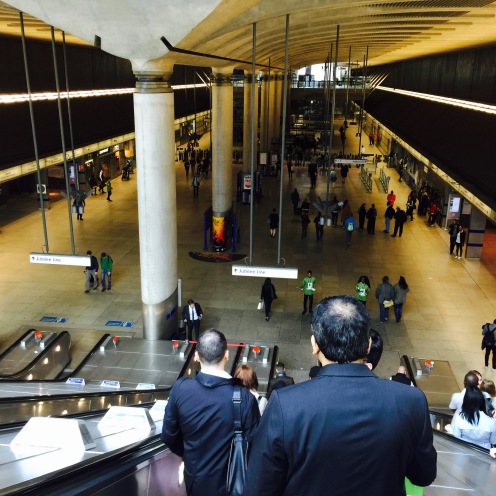 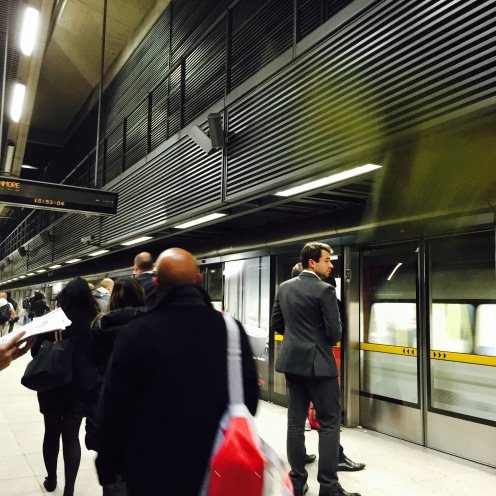 It is probably the easiest foreign subway system.

Load your card with $ and go.

My friend wasn’t going to join me for the sightseeing portion of the day.

So he took the opportunity to pass by his London office in Soho.

I had only asked him 1 favour.

To come with me to Buckingham Palace so I can get a picture of me that WASN’T a selfie. 😀 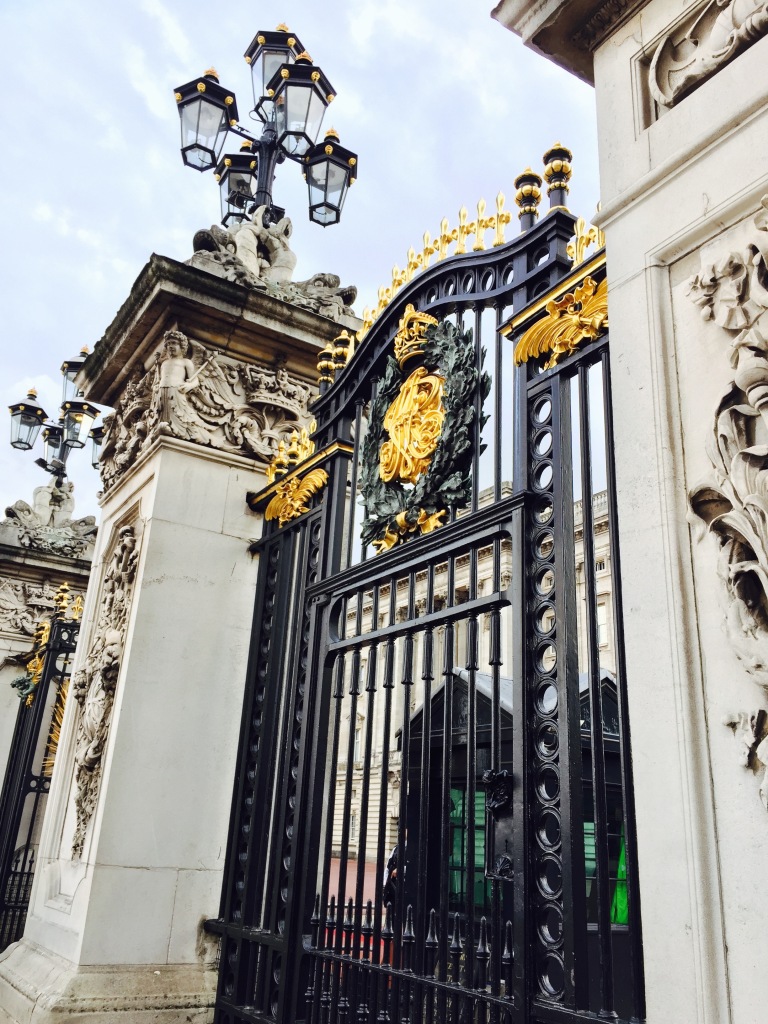 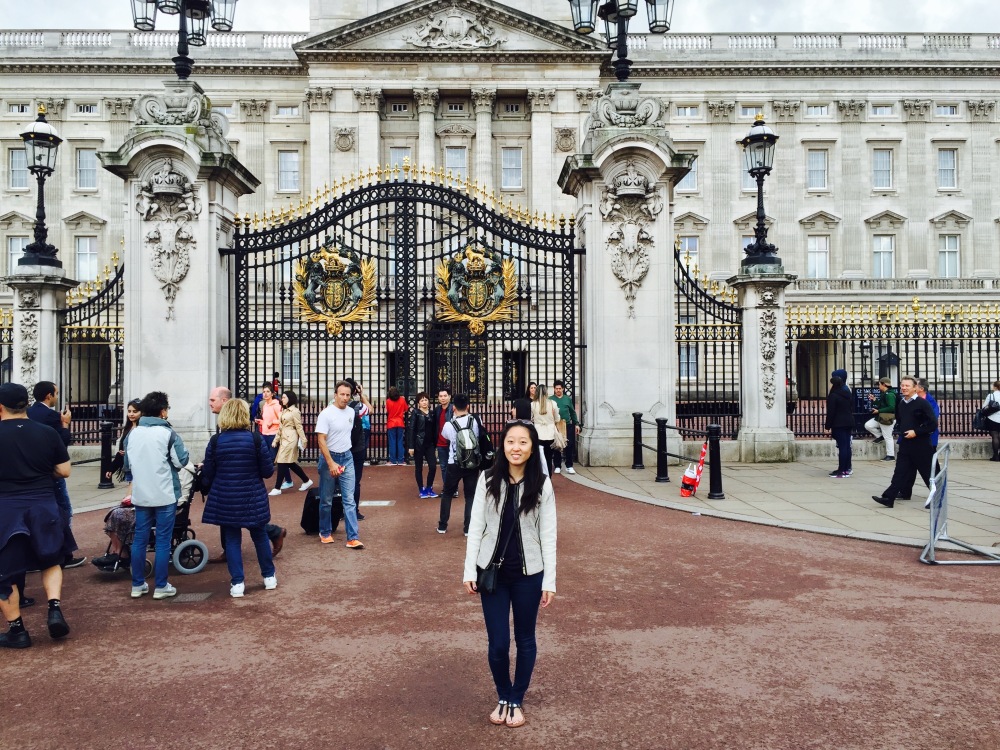 After some fun times at the Palace, we parted ways and I walked towards my next destination.

Unfortunately, the visiting hours were done.

(I wouldn’t have had time anyways)

I took a couple of pictures, visited the Westminster Abbey Gift Shop, and then walked to my next destination.

I think the nicest British landmark I visited today would definitely have to be the Big Ben.

But it looked much nicer than in pictures.

The rest were beautiful too, but looked like they did in Google Images.

But Big Ben .. was just one of those that pictures couldn’t do justice.

No matter how many different snapshots I took (about 30, to be honest), it just wouldn’t come out perfectly.

The sun was setting, which still somehow made for a nice picture.

I walked along the bridge to get a fuller picture of the Parliament and the Big Ben.

There were lots, and lots, and LOTS of tourists everywhere.

Makes me wonder what it’s like during the actual tourist season ..?

After spending much solo time enjoying the beautiful city of London from the bridge, I took a glance at my watch.

My time was limited.

My next destination was Covent Garden and it was going to close at 7:00PM.

But in a city like London, it can’t really be the case.

You end up looking at almost everything around you.

Trying to take in everything you see.

And taking pictures too.

It is incredibly astonishing how many buildings are so beautlfully crafted and almost intact.

Sculpted pieces as if they were done yesterday. 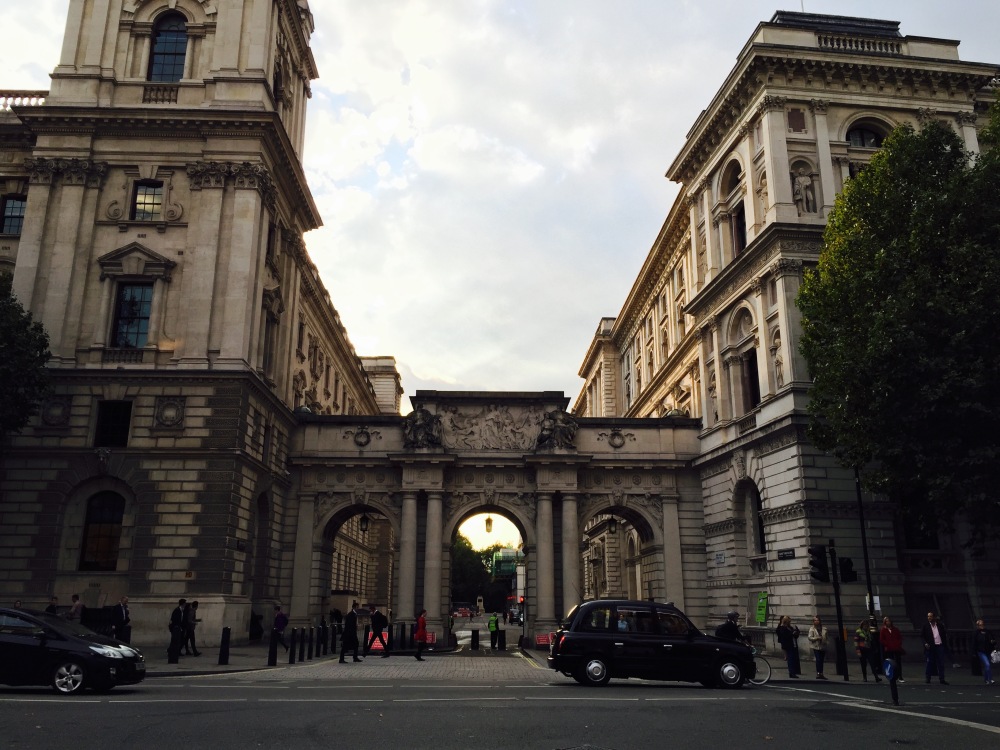 I stumbled upon the National Gallery of London in front of the Trafalgar Square.

Interestingly, there was a Malaysian Festival happening in the square in front of the Museum.

There was a giant stage with performances going on and tents serving food (like food truck food!!)

It was really crowded, however.

(as you can see in the picture above)

As it is everywhere else in London.

I took a few pictures of the National Gallery of London and then continued on to Covent Garden.

(hoping to return one day to actually visit the permanent collection)

After passing by Charring Cross station, I had finally arrived at my destination where I would spend the next hour or so. 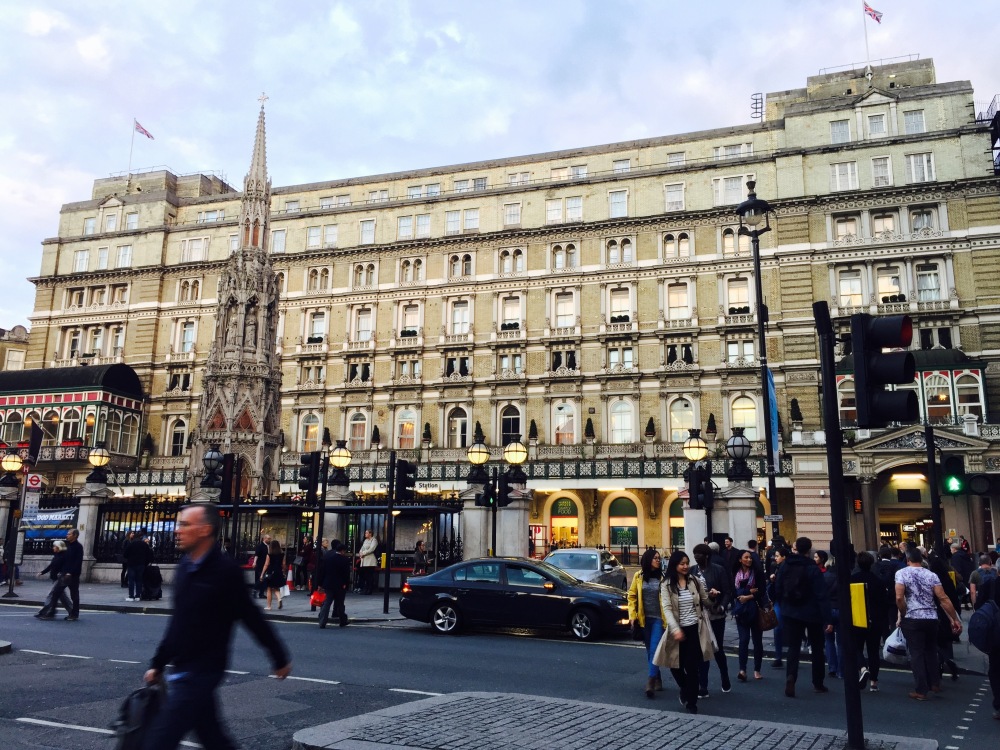 The first thing I stumbled upon was an art installation that my friend Chelsea had told me about.

*SIDENOTE:YOU MAY SKIP THIS PART IF YOU’RE NOT INTO ART.

I may not have mentioned this in any of my blogs,

I studied Art History in CEGEP and as a minor at McGill University.

I have a deep appreciation for the arts – and always have.

Sadly the entire time I was in Europe, I didn’t get to see any exhibitions or visit any museums because of the time constraint.

But I will return one day on a full Art excursion with my mum – who shares the same passion as me.

On a sidenote to my blog, I just wanted to share the significance of Charles Pétillon’s art installation at Covent Garden.

Installation: 100,000 giant white balloons with pulsating lights to symbolize the beating of a heart.

Meaning: Apparently, the ballons are used a metaphor to signify the life of the Market at Covent Garden – and its signifance in the past and today in the City of London. Like a heartbeat, it’s always there, marking its presence by its lively activities day to day. 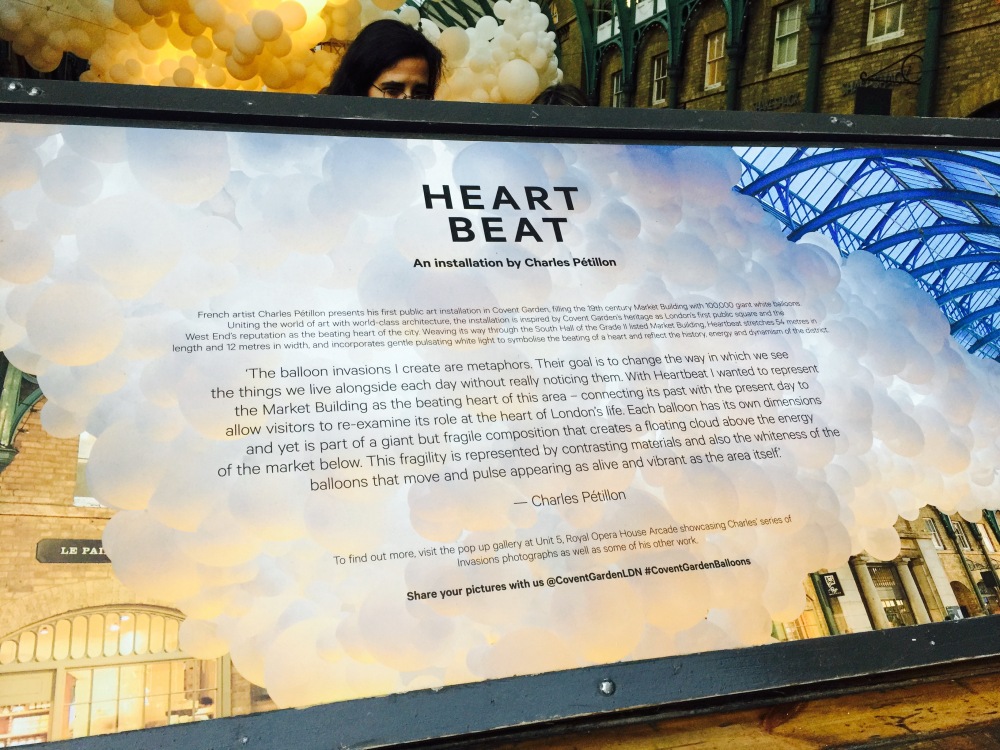 As I walked through Covent Garden, I walked into a few interesting stores.

And of course, the Apple Store.

I had remembered reading about this new store opening a few years back.

I also found Kate Spade, but it wast too late at that point and the store had already closed.

Probably for the better … since I would’ve spent more money there!

I finally received a call from my friend to meet for dinner.

I had one last thing on my list to visit. 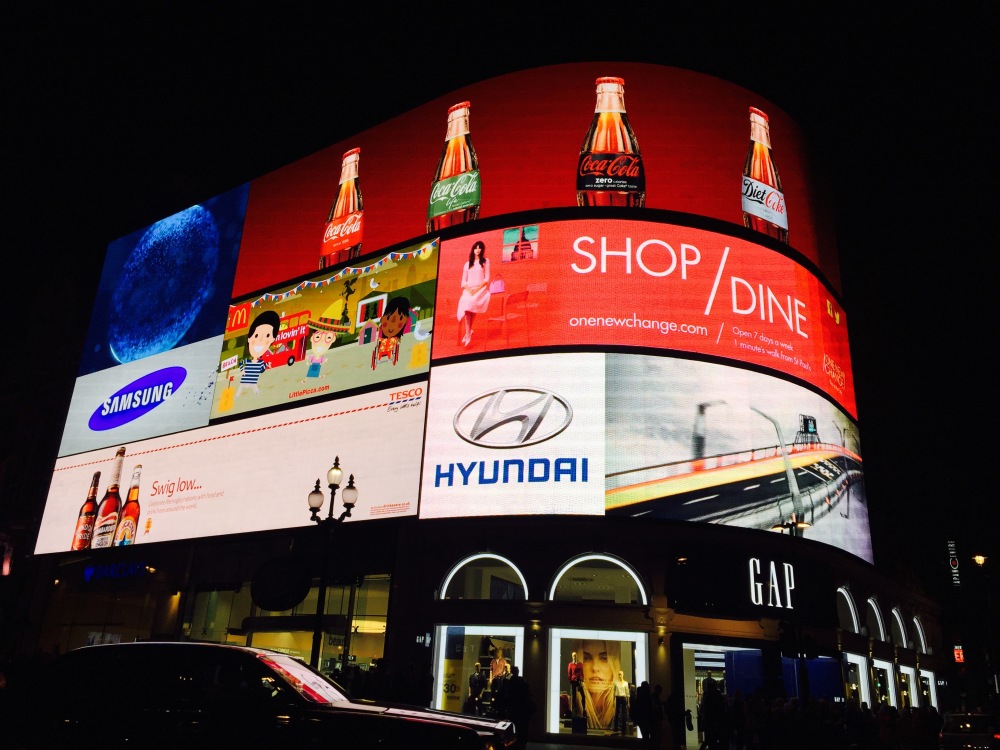 So I met Andy there.

It took us 30 mins to find a place to eat since almost all the restaurants were crowded.

We walked into Burgers & Lobsters and their wait time was 1hr30 mins.

So we walked further and just ate at Muriel’s Kitchen.

I had the oh-so-British-famous Fish N’ Chips served on a wooden platter.

My fries seemed like they were served in a ceramic pot meant for plants! 😛

The fish was so full of meat.

I’ve had Fish N Chips back in Montreal where the batter is too thick and there is a disappointing space between the crusting of the batter and the actual fish.

But this fish (haddock, more specifically) was juicy, tender, and so meaty. 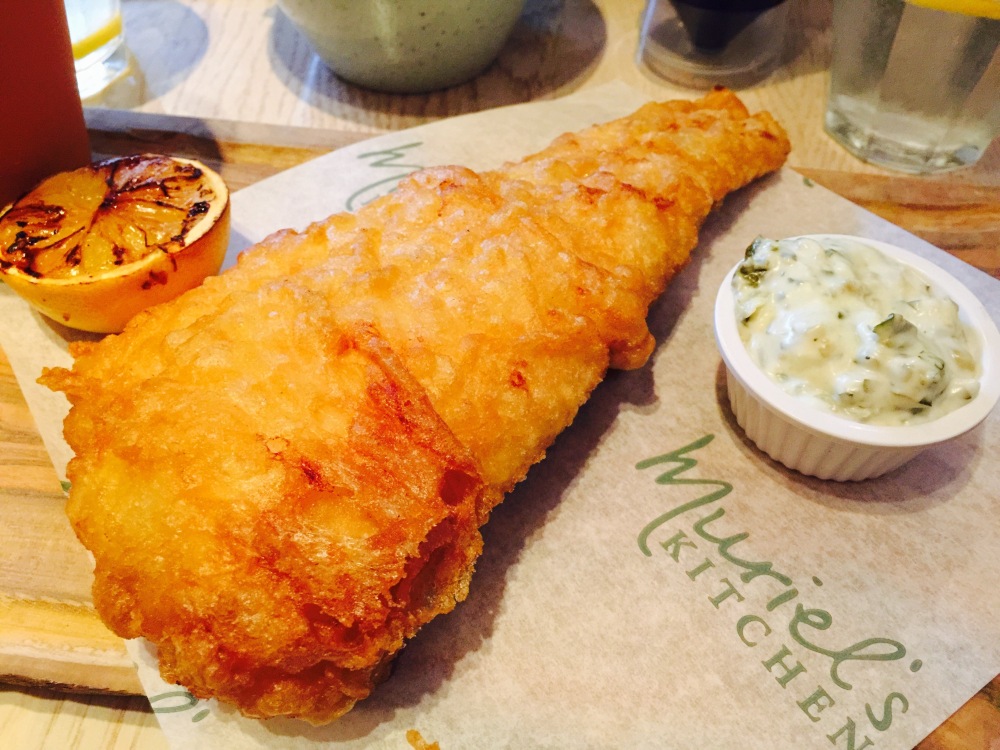 On our way back to the hotel, we stopped at a subway stop after Canary Wharf to go to a Starbucks for drinks and to buy some of my collector’s mugs.

Thanks for taking the time to read this long blog 😉

PS. I got myself my own London souvenir.